Journey to the magical River Kingdom of Elaris as a battle rages as an evil army intends to overthrow the empire in this new release from NextGen Gaming. The realm of Elaris is ruled by the noble King Trenin DeSaxe and it is up to his ragtag band of heroes to save the day on the battlefield. This bunch of heroes are known as the mighty “Dragon Generals” and consist of a giant knight, a skilled archer, a virtuous dwarf, and a mysterious sorceress. The dust has settled and victory is within reach for these brave warriors. Have a sharp sword at the ready and join in the fight to guarantee victory on the battlefield for the King and hopefully he will reward us with some of his vast treasure! 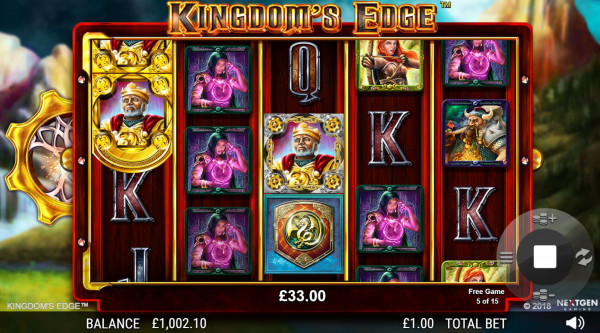 The Scatter symbol is depicted by an image of a Shield and if you land 3 or more of these symbols on the reels then you will trigger the special Defend the Gates Free Games feature. The more Scatters you land then the more Free Games you will receive. For example, 3 awards 15, 4 gives 20, and if you land 5 Scatters then you will receive 25 Free Games. A nice benefit of this feature is that the Rally the Troops feature is also active here but with a slight difference. When a Gold Wild appears partially on reel 1 then it will proceed to nudge to occupy the entire reel and if a fully Gold Wild stacked symbol appears on reel 1 then you will receive 5 or 10 Extra Free Games. It’s also worth mentioning that the Rally the Troops feature can give you multipliers as high as 5X. The Defend the Gates Free Game feature can also be retriggered by landing additional Scatters on the reels. Amazingly, there is no limit as to how many Free Games you can win!

The presentation of the game is superb as it is set in the River Kingdom of Elaris with tall mountains in the distance, lush green trees, and rivers flowing down into a big lake. The reels are displayed in front of a stylish red wooden board. Symbols are beautifully designed and consist of the King, an Archer, a Knight, a Sorceress, a Dwarf, a Shield, and your typical A – 9 icons. The animations are smooth as symbols fall neatly into place and enlarge and flash brightly when part of a winning combination. I also like whenever you trigger the Free Games feature how the background changes to a night-time setting as the battle rages on.

The music features a soaring epic soundtrack. It complements the fantasy theme of the game perfectly.


Our Verdict on Kingdom's Edge

This action-packed slot comes from NextGen Gaming and is a highly enjoyable game to play. Kingdom’s Edge features cracking visuals, a thumping soundtrack, and a superb set of bonus features to ensure you keep spinning those reels for as long as possible. The biggest wins in this game come from triggering the Rally the Troops feature while in the Defends the Gates Free Game feature as once you do this then you will receive lots of Free Spins, Stacked Wilds, and Multipliers as high as 5X! When it comes to variance, I found this slot to be High so it will definitely take a chunk from your bankroll but with a top payout of 3,000X to aim for then this game is definitely worth a few spins of your time. For slots with a similar fantasy theme, check out Knights of Gold and Forbidden Throne.

Rally your troops to victory to win massive cash prizes when you play Kingdom's Edge!