Jurassic World from Microgaming: Slot Review - survive at all costs!

Get ready for an action-packed trip back to Isla Nublar where the dinosaurs are on the loose yet again!
casino game review jurassic park jurassic world microgaming slots

This game is based on the 2015 blockbuster movie. If you are a fan of the Jurassic Park franchise then you will have thoroughly enjoyed the trip back to Isla Nublar when this film was released. The movie takes place twenty years after the original events of Jurassic World and this time around we follow two young brothers called Zach and Gray who are lost in the theme park as the dinosaurs begin to run amok everywhere. With the help of the park’s manager Claire and Owen who amazingly trains the velociraptors in the park, can you save the brothers in time and make it off the island in one piece?

The game has 5 reels with 243 ways to win and comes with an Indominus feature, Wild Scatters, Rolling Reels, and Free Spins. 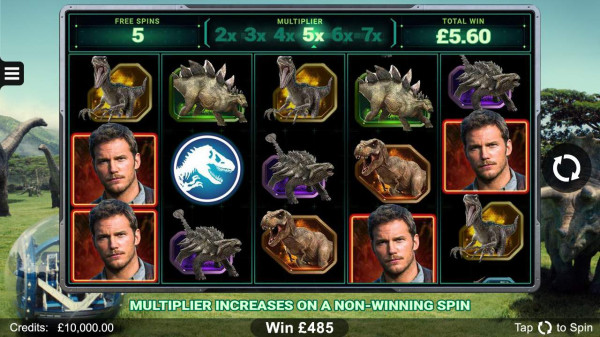 The first feature to highlight is the Wild symbol and this is represented by the Jurassic World logo in the game. Like most Wild symbols, it replaces all other symbols to help form winning combinations on the reels. A neat feature of this symbol is that it appears stacked up to an incredible 10 symbols high!

As you play the game, make sure to keep an eye out on the fearsome Indominus Rex dinosaur as it can appear randomly when you land a win between 3X – 50X your initial wager. When it does show up, it will help boost your winnings up to a massive 1,000X your total bet!

The Scatter symbol is illustrated by a mosquito that is covered in bright orange amber. If you are lucky enough to land 2 of these symbols on the reels at the same time then they will transform into Wilds to further boost your winnings. Land 3 or more Scatter symbols on the reels and you will trigger the Free Spins feature. Once activated, you will get play one of three different Free Spins features. These features are awarded randomly until you unlock them and get to choose for yourself after playing at least 15 spins. The features are as follows:

The game has a highly polished presentation as it features some nice imagery from the movie and it is set just above the viewing pool where the ferocious Mosasaurus swims and eats Great Whites for breakfast! Symbols are comprised of characters from the movie such as Claire, Owen, Simon, Vic, as well as a nice collection of dinosaurs including the infamous T Rex, a Velociraptor, a Stegosaurus and the new dinosaur on the block the Indominus Rex. The animations are a real visual treat as symbols run sleekly on the reels and you’ll notice a nice light blue sparkle effect as the reels begin to slow down.

The music is fast and quite atmospheric. It complements the action-adventure theme of the game perfectly.


Our Verdict on Jurassic World

Jurassic World is made by Microgaming and it's wonderful adaptation of a magnificent movie. The game is beautiful to look at and really easy to play. The features of the slot are highly rewarding and will provide players with countless hours of entertainment. The Indominus Rex did show up at least once while playing this game and the fact that this fearsome looking dinosaur can give you a boost up to 1,000X your stake is incredible. I found this game to be of Medium variance so you won’t have to wait too long until you land a dino-sized payout and with the chance to win up to 14,166X on each spin, you would be mad not to take this game for a few spins or two!