Jackpot Jester Wild Nudge from NextGen Gaming: Slot Review - this Golden Jester wants to lead you to the jackpot

The first thing that struck me about the game is the cover star is a sexy female jester covered in gold. I am sure there is a wee nod to Harley Quinn there. It is also set in an underwater casino so normality goes out the window here!

Jackpot Jester Wild Nudge is the much-vaunted sequel to Next Gen’s classic Jackpot Jester 50000. It is quite similar to the original but you know what they say...imitation is the highest form of flattery!

It is a 3 reel slot game with 3 rows and 5 paylines and has some cool features such as the Super Game which opens an additional slot game within the game. 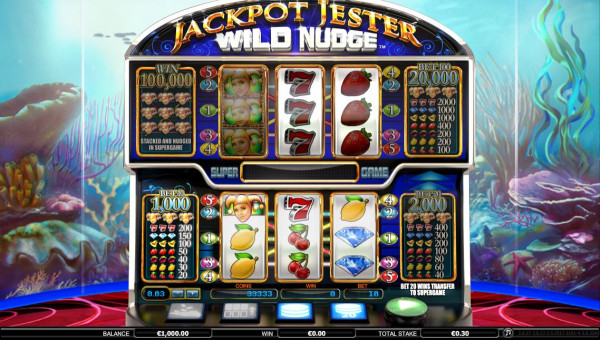 The first feature of this game worth highlighting is the Wild Symbol which is depicted by the Golden Jester. It substitutes for all other symbols in the game.

It’s a great feature and really innovative how you can toggle between two slots while playing.
Another nice addition to this feature is that Wild Symbols are stacked and if just a part of a stack of wilds land then the whole stack will be nudged and this greatly enhances your chances of a huge win. If you manage to fill all the wilds then you will the massive jackpot.

The game looks great and I really liked the retro feel of it. From the use of old-school symbols such as Cherries and Bars through to the flickering lights on the slot itself.

The background has a very aquatic theme with fish swimming slowly among the reefs and clams opening and closely their shells. The symbols swoosh along the reels quite nicely.

The music is quite trippy and a little bit techno but it suits the game’s theme quite well.

Jackpot Jester Wild Nudge is made by NextGen Gaming and it is a fine sequel to Jackpot Jester 50,000. Once you get into the Super Game then you will it hard to stop spinning those reels.

The retro feel and presentation, along with the cool Super Game feature make it an essential slot to play. A nice game for casual through to hardcore players to have some fun with.

Nudge that Jester and get spinning!