Golden Ticket from Play'n GO: Slot Review - time to go to the carnival!

The 5x5 circus-themed slot game developed by Play'n GO greets players with the classic circus theme tune. No worries, though, while this tune may be fun for a little while, it can get rather annoying. Play'n GO, well aware of the fact, has developed Golden Ticket so that the tune ends once players get started with the game. 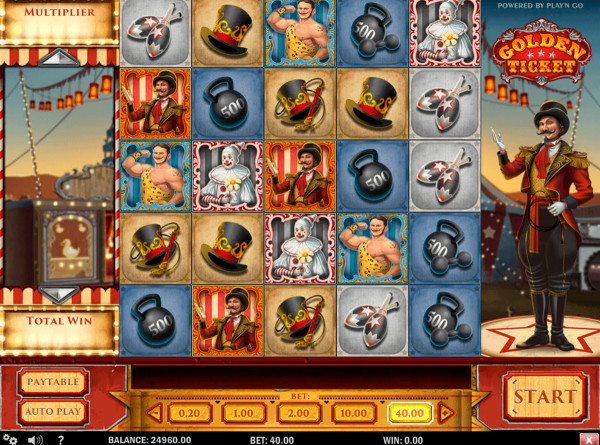 Aside from the rather impressive graphics, which can, however, be a little tiring due to the darkness, the most promising feature in this slot game is the golden ticket bonus game. With every spin, the word bonus appears somewhere on the columns. If a player manages to clear one of the columns, the bonus game will be triggered.

Players are then redirected to a shooting gallery, where the player can get up to 20 rounds awarded. Aside from this little oddity, Golden Ticket by Play'n GO is rather straight forward. Players simply need to match three symbols in a row, vertically or horizontally, to win a prize. The different symbols are of different worth, with the top prize being 1,000X your total bet. Golden Ticket, with a 96.69% payout, is a game of rather an average variance, yet, the winnings while small come regularly.

On the right-hand side, the screen shows a clown, in detail designed, who points toward the reels, and hopefully the winnings that can be made in this slot game. Among the symbols are some of the typical signs that represent circus bonanza, including a strong man, some dumb bells, a magician's hat and a white and scary-looking clown. The latter really captures the theme well, rather than this slot game revolving around a happy circus theme, there is something sinister and scary about the Play'n GO slot game. This, however, is far from criticism - an eery circus makes for a great slot game theme.

This game is slightly different to other games. Golden Ticket allows players to pick from a variety of stakes rather than the finer adjustment. With a selection of 0.20, 1.0, 2.0, 10.00 and 40.00 it's a pity that no stake between 40 and 10 is available. Given that the maximum is quite the risk to take, I tend to choose 10 or lower. With the winnings being relatively low in Golden Ticket this seems to be the better tactic than risking a lot of money. The slot game is best enjoyed with a few spins, which will frequently result in some wins.

Our Verdict on Golden Ticket

The best about Golden Ticket is the slot game's fun theme. Alike at the circus, winnings will come and go. These, however, will never quite reach the same heights as in other slot games. Just like its theme, this slot is fun.