Golden Legend from Play'n GO: Slot Review - a simple game that may be what you're looking for

Golden Legend is a slot game developed by Play'n GO.

So far, the impression is positive. However, the design itself really is subject to taste. Think take-away menu or else classic Las Vegas slot machines, there certainly is something retro about Golden Legend’s look and feel. 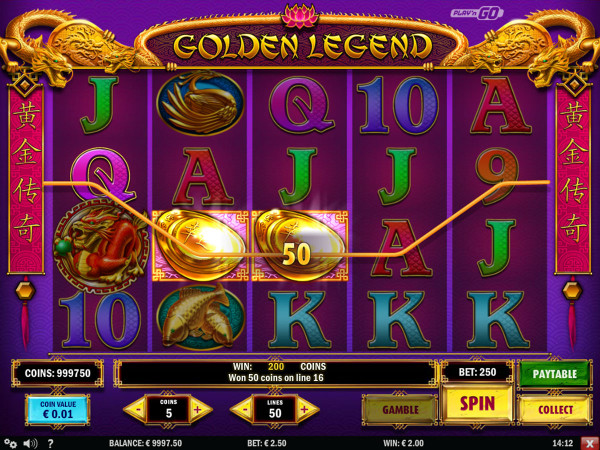 Golden Legend is super simple. In fact, it’s so simple that the only bonus feature has to be my favourite feature. Free spins it is, and of these free spins, there aren’t overly many. Three scatters, represented by the red dragon, triggers ten free spins. These can be re-triggered – only once, though! – by getting the scatter symbol at least three times, and also on reels 1, 2 and 3.

With that as the sole bonus feature, the free spins feature is by default also my least favourite feature. I feel silly saying this, given that despite the lack of other exciting features, this bonus feature in Golden Legend does at least appear rather frequent.

It greets players with a loud pink and purple-ish background and loads of gold. Dragons, lotus flowers and Chinese symbols star within the game, as well as buttons common for most well-developed slot games, such as the Autoplay and Bet Max buttons. The slot game has 5 reels and 4 row, and its overall appearance is - as one has come to expect of Play'n GO – super professional. The game loads fast and seamlessly, never does it lag while its graphics shine in razor-sharp imagery.

This slot game is said to have a fairly decent theoretical return to player (RTP) of 96.50%. Given that the payouts aren’t overly high in this game, the best tactic is probably to prolong your gameplay. While this is no guarantee, this tactic allows players to earn more and more trough small wins that tend to occur frequently. Well, at least if you are lucky!

Our Verdict on Golden Legend

This slot game really is a mixed bag. You either like it, or you don't. It's super simple, and its design certainly isn't to everybody's liking. Nevertheless, the wins are solid, as the golden animals, including fish, dragons, tortoise, tigers and swans, pay fairly good rewards, while the letters in the slot game only achieve lesser amounts. The best recommendation is, try and see for yourself if you like this slot game by Play'n GO.