Ghostbusters Triple Slime from IGT: Slot Review - I ain't afraid of no ghost!

Ghostbusters is one of my favourite movies of all time so I was very excited when I heard that IGT was releasing a new slot based on the classic movies. For those that have never seen the movie, it is about a bunch of guys who capture ghosts on the streets of New York all the while driving a white souped-up ambulance/hearse hybrid type car! The movies balanced comedy and some well-timed frights perfectly. Just recently, an all female-led version of Ghostbusters was released but unfortunately, it was not received as well as the classic movies that featured Bill Murray and Dan Aykroyd. Hopefully, the franchise will find its feet again and we will all know who to call when there is something strange in our neighbourhoods! 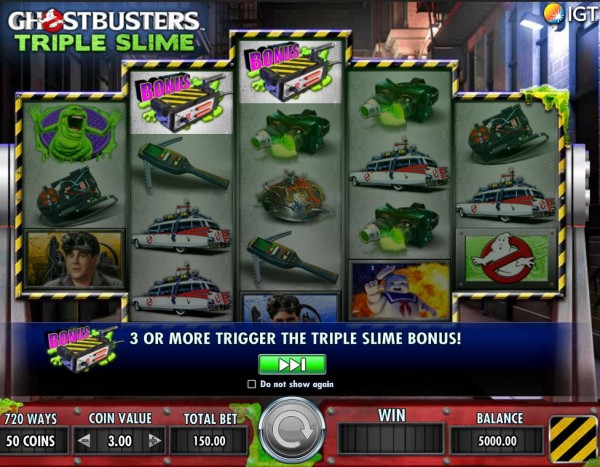 The first thing to mention is the MultiWay Xtra reels. These type of reels are very different than what you would normally find in other online slots as they are uneven for a start and display in an unusual 3x4x5x4x3 structure. The reels also pay from left to right and right to left and offer players up to 720 ways to win. Another nice feature of these reels is that if you land a few of the same symbols then your wins will be multiplied for even bigger payouts.

The iconic Staypuft Marshmallow man is the Wild symbol and it substitutes for all other symbols except the Ghostbuster Logo and Bonus symbols. It only appears on reels 2, 3, and 4 and a nice thing about this symbol is that it comes stacked across the reels.

If you land 3 or more Scatter symbols in any position then you will trigger the Slimer Scatter Bonus game. The Scatter symbol is illustrated by the famous green ghost Slimer. In this feature, the Scatter symbols become Scatter wheels and the prizes you can win depend on where your scatters land to trigger the feature. Each wheel will spin to determine the total multiplier applied to your bet. The prizes are as follows:

The game also features another cool bonus game called Triple Slime Bonus. To activate this feature, you’ll need to land 3 Bonus symbols in any position on the reels. The Bonus symbol is depicted by a ghost trap. The main aim of this game is to carefully pick from a selection of ghosts. Each ghost that you select will be placed in a green, red, or purple trap and the more you find of the same colour then the more pointers you’ll be awarded for the bonus wheels. Once you are done selecting, you then get to spin the bonus wheels and see what multiplier prizes await you. This feature is highly lucrative as it is possible to win a staggering 2,919X your total bet from the wheels!

The game’s presentation is excellent as it features so much stuff from the original Ghostbusters movies that fans are going to love playing this game. For instance, the symbols consist of some of the Ghostbusters such as Peter and Ray as well as their equipment like the famous proton pack, ecto goggles, and of course the iconic Ect-1 car. The backdrop of the game is set inside a dark alley where no doubt something has definitely gone bump in the night! The animations are worth a mention too as symbols flash and move and the reels zap into life with a jolt from a proton pack from time to time.

The music is, of course, the classic Ghostbusters theme. This song is known the whole world over and needless to say suits the game perfectly.


Our Verdict on Ghostbusters Triple Slime

Ghostbusters Triple Slime is created by IGT and it's a fine tribute to a much-loved movie franchise. The MultiWay Xtra reels is an innovative feature and it helps tremendously for big payouts since it pays from right to left as well as left to right. Surprisingly, the game does not feature any Free Spins but the Slimer Bonus and Triple Bonus features more than make up for this as they offer excellent replay value and some very nice rewards. I found this slot to be of Medium variance so expect to see wins occurring on a regular basis when you play this game.