Ghost in the Shell from 888: Slot Review - defeat the baddies in New Port City!

Visit New Port City where humans and cyborgs live together in a society filled with crime and corruption.
888 casino game review ghost in the shell jackpot slots slots

This slot is based on the extremely popular Ghost in the Shell franchise. It’s a famous Japanese graphic novel that spawned a whole series of movies, TV shows and video games. If you are not a fan of Japanese anime or manga then don’t worry as the new Hollywood movie version starring Scarlett Johansson is going to introduce this series to a whole new generation.

Ghost in the Shell is set in a cyberpunk future where humans can become cyborgs and get hacked through their cyberbrains and it follows the main character Motoko Kusanagi as she battles other cyborgs and corrupt officials in New Port City.

It’s a 5 reel slot game with 9 paylines and features include Wild multipliers and a Pick Me option. 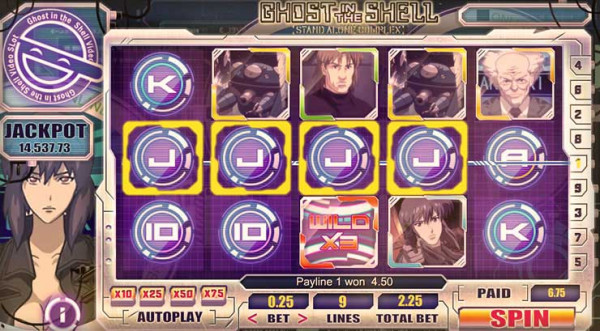 If the Motoko or Batou symbols appear on the centre of reels 1 and 5 at the same time then the Pick-Me feature is triggered. This feature involves picking symbols. If you choose the correct symbol then your bet can be multiplied between 3X up to 40X. However, if you choose incorrectly then the game will end and you will be taken back to the base game.

The last feature to mention is the Jackpot. This is awarded randomly you don’t even have to match some symbols in order to win it. The bet size you place determines your chances of winning this Jackpot.

The game is a fantastic rendition of the Ghost in the Shell series. I really enjoyed the anime myself and I noticed right away that the whole slot layout is completely based on the anime. It is a nice touch and one that fans will enjoy.

The symbols spark and animate nicely when you land a winning combination on the reels.

The music is full of techno and big beats and is very reminiscent of the Ghost in the Shell anime movies.


Our Verdict on Ghost in the Shell

Ghost in the Shell is made by 888 and it’s a faithful adaptation of an extremely popular Japanese phenomenon. If you are a fan of this franchise then you will love this slot. Even if you are not, there are enough cool features such as the pick-me option and a nice progressive jackpot that will draw you in as well. Get ready to enter New Port City with Motoko and defeat those corrupt cyborgs on the loose!

Find the Ghost in the Shell and win a big payout!