A Nightmare on Elm Street from 888: Slot Review - don't fall asleep or Freddy will get you!

Visit Elm Street where nightmares come to life and Freddy Krueger is just a claw away from getting you!
888 a nightmare on elm street casino game review jackpot slots slots

This game is based on the scary A Nightmare on Elm Street remake that was released back in 2010. Jackie Earle Haley donned the infamous red and black jumper and claws as he took over from Robert England and this move was a reboot to introduce Freddy Krueger to a whole new generation. I recall this movie being quite scary but nowhere near as frightening as the original.

It is a 5 reel slot game with 30 paylines and comes with features such as expanding wilds, free spins, never sleep again and a pick me option. 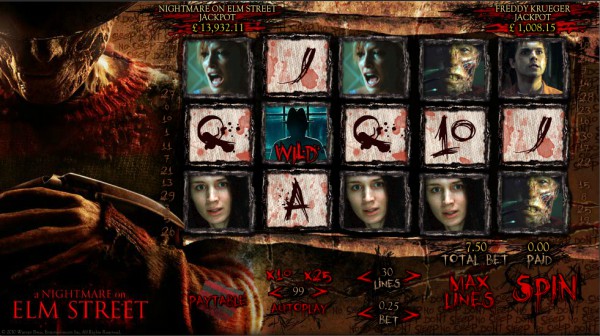 Top Casinos for A Nightmare on Elm Street

More Top Casinos for A Nightmare on Elm Street

The first thing to highlight is the Wild symbol and this is denoted by Freddie Krueger’s ominous shadow. As per usual, it substitutes for all symbols except the Scatter symbol which is illustrated by Mr Krueger’s sharp claws. It’s worth noting that the Wild symbol triggers a few features in this game. For starters, if a Wild symbol appears on reel 3 then it will expand to cover all positions on the reel and all wins will be doubled if the expanded Wild was used to form a winning combination. It is also the highest paying symbol in the game and if you are lucky enough to land 5 Wild symbols on an active payline then a staggering 10,000X is applied to your bet!

If the Wild symbol appears on reels 1 and 5 at the same time then the Pick-Me feature is activated. This involves picking a symbol to reveal a cash amount and sometimes you will get to pick another symbol again.

The Bonus symbol is illustrated by a Never Sleep Again logo. If you manage to land 3 Bonus symbols across the reels then this bonus game will be triggered. It involves picking items each round to progress with points to get to a fourth final round. Choices are random each round with prizes growing in value the more you progress.

The last feature to mention are the progressive jackpots. There are in fact two, the Nightmare on Elm Street Jackpot and the Freddy Krueger Jackpot and they pay out randomly. There are handy meters displayed beside the reels which tell you exactly how much they are worth.

Best Welcome Bonus for A Nightmare on Elm Street

More Bonuses for A Nightmare on Elm Street

The game is a superb take on this popular slasher movie. Freddy is the star of the show when it comes to the features as he covers the background of the slot in a menacing fashion.

The symbols are covered in blood and it is cool they used the characters of the movie as symbols as well. It really ties it all together nicely. I enjoyed taking part in some of the features such as the Never Sleep Again mode. The graphics looked great as you carefully selected items on screen in relation to the movie such as coffee cups, TV channels and the correct phone number to call for help.

The music is very moody and atmospheric and you can almost feel Freddy sharpening his claws behind you as you spin those reels.


Our Verdict on A Nightmare on Elm Street

A Nightmare on Elm Street is produced by 888 and it’s a scary trip to Elm Street where you will be constantly watching your back and trying to avoid Mr Krueger at all costs! It contains some really neat features, especially the Never Sleep Again option and two very attractive progressive jackpots. If you like your slots on the horror side then this slot should be right up your alley!


Don’t fall asleep and escape the Nightmare on Elm Street!