Game of Gladiators from Play'n GO: Slot Review - unleash hell on the reels!

Enter an arena full of gladiators and battle your way to fame and glory on the reels in this excellent slot from Play'n GO.
casino game review game of gladiators play'n go slots

It’s time to sharpen up your sword and fight for your life as we head back in time to Ancient Rome in this new release from stellar software provider Play’n GO. As you might have guessed from the name of the game, this game is all about a bunch of fierce looking Gladiators who are facing off against each other inside the Great Arena. The main objective here is to be the last Gladiator standing. In order to do this, you will need to win the special Enter the Arena tournament. Read on to see how we fare as we enter the amphitheater and attempt to beat Gladiator after Gladiator in this exciting online slot?

Game of Gladiators is a 5 reel slot with 20 paylines that includes Expanding Wilds, Duplicated Reels, Respins, and Free Spins. 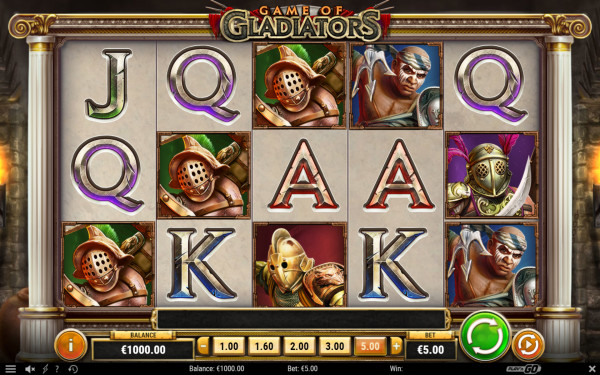 Top Casinos for Game of Gladiators

The first feature to talk about is the Wild symbol. This symbol is represented by an image of a Tiger and replaces all other symbols on the reels apart from the Scatter to help create winning combinations on the reels. It is also the most rewarding symbol in the game as if you happen to land 5 of these symbols on an active payline then you’ll be leaving the arena with a nice cash prize worth 25X your stake.

In the main game, 5 bonus features can randomly trigger on any spin. They are as follows:

The star attraction of this game is without a doubt the Enter the Arena Battle feature. To trigger it, you will need to land 3 Scatters on reels 1, 3, and 5 on the same spin. The Scatter symbol is illustrated by an image of a Portcullis. Once in this feature, you will then get to pick a Champion from either Spartacus or Amazonia. Whichever fighter you have chosen will then replace the Scatter symbol for the entire Free Spins feature.

The feature works like this - you will receive Free Spins until the battle is won or lost. The battle triggers each time a Scatter symbol appears on the reels. All matching high-value symbols that land on the reels are collected and added into a group above the reels on the Battle Meter. The more high-value symbols you collect then the bigger the Battle Prize becomes. Furthermore, every Scatter symbol that lands will launch 1 attack on the group of high-paying symbols above the reels and destroy them. Landing 2 or 3 Scatters will apply a 2X or 3X multiplier to the Battle Prize. The battle is only won when all groups are destroyed and is lost if the groups manage to fill the Battle Meter completely. It is actually possible to get unlimited Free Spins here provided that the Battle keeps on going.

Each champion also awards a different Victory Prize in the Enter the Arena Battle feature. For example, Amazonia givers a prize of 20X to 100X your stake whereas Spartacus can retrigger this feature to give you a chance to battle it out all over again.

More Bonuses for Game of Gladiators

In terms of visuals, this game is graphically stunning as it takes place in front of the entrance to the Battle Arena with flaming torches on opposite sides of the reels and clay vases lying on the ground. Symbols in the game are full of detail and bright colours and consist of a Tiger, a Portcullis, a bunch of mean-looking Gladiators, along with classic A – J icons. The animations and effects are fantastic as symbols drop into place on the reels and burst into life when part of a winning combination. In particular, I like when the Tiger Symbol is part of a win as it lets out a huge roar and then claws at the screen.

The music is moody and atmospheric that’s quite reminiscent of the hit Gladiator move. It fits in really well with the Ancient Rome theme of the slot.


Our Verdict on Game of Gladiators

Top software provider Play’n GO produced this slot and it’s one Gladiator themed online slot we thoroughly enjoyed playing. Game of Gladiators features outstanding visuals, a wonderful matching soundtrack, and lots of exciting bonus features to keep you in the Battle Arena for as long as possible! The 5 random bonus features are a welcome addition to this slot as they keep the excitement levels up as you spin the reels. The most lucrative feature in this game by far is the Enter the Arena Battle feature as it is here where you can win enjoy unlimited Free Spins as well as win the top prize which is a staggering 5,000X your wager! When it comes to variance, I would say this slot is quite High which means you will need to bring lots of bankroll to the arena here if you plan on winning a big cash prize! For slots with a similar Gladiator theme, check out Champions of Rome and Gladiators Go Wild.

Battle your way to wealth and glory on the reels when you play Game of Gladiators!