Eye of the Kraken from Play'n GO: Slot Review - a game with exquisitely detailed graphics

Eye of the Kraken by Play'n GO sure is a little different. The slot game offers continuously small winnings, yet to achieve the big winnings via the bonus game, players of this online slot require patience.
casino game review eye of the kraken play'n go slot machine slots

This game should not be confused with the video game of the same name. Yet, it appears that much inspiration has been drawn from it for this slot game. Once, players get started on Play'n GO’s Eye of the Kraken, the highly detailed graphics will be the first that sticks out. 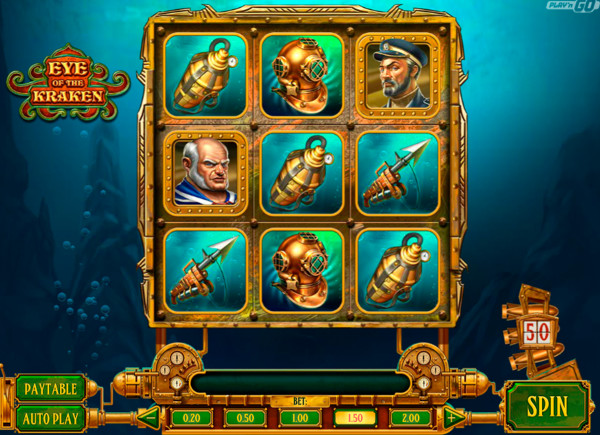 Top Casinos for Eye of the Kraken

More Top Casinos for Eye of the Kraken

Eye of the Kraken isn’t a game like any other. While it has three reels and, at first, may seem conventional, its bonus features make it outstanding.

Of course, you will get a chance to destroy that Kraken. Players need to collect 50 torpedoes to activate the bonus game ‘Conquer the Kraken’. While this may sound daunting, and requires at least 100 spins, it does pay off. Once redirected to the bonus game, players have a choice of three of the Kraken's tentacles. Players can win cash prizes, but even better, they can win 500-times their stake.

A less unconventional bonus feature is the wild substitutes. Not a bad little extra, but rather standard in most slot games today.

Best Welcome Bonus for Eye of the Kraken

More Bonuses for Eye of the Kraken

Kraken is a sea monster that lives off the coast of Norway and Greenland. The idea is to ‘catch’ the Kraken. If his tentacles slither onto the reels, the symbols will turn wild. Other symbols include compasses, oxygen tanks, diving masks, the captain and the engineer.

The sound effects are a little intense, almost terrifying. Yet, it adds to the highly atmospheric game, Play n’Go has managed to create. This game is also available in a sleek mobile version. Given the greater screen resolution on many small high-spec tablets or phones, the graphics tend to look even more impressive when played on mobile.

It may seem that to collect 50 torpedoes players need to invest loads of cash. While this may be true, 50 torpedoes don’t come by that easy, even in real life, the winnings along the line are stable. While they may be small drippings, they keep players going until they reach 50 torpedoes.

My tip is to keep aside a little percentage of your winning each time so that you can be sure not to lose it all before being redirected to the bonus game.

Our Verdict on Eye of the Kraken

This game sure is different. The theme is great for fans of Nordic legends. I, for one, had not heard of Kraken previously and looked into the background. Interesting! The game, due to the time it requires to collect 50 torpedoes, may not be a game for every day and for people who wish to experience substantial instant winnings, after seconds on the reel.