Visit the savannahs of Africa and come face to face with a herd of mighty elephants in this fun game.
casino game review elephant king igt slots

The beautiful savannahs of Africa are a source of great inspiration for many software developers as they invite players to catch a glimpse of wild animals roaming the land in their natural habitat. This latest release from stellar software studio IGT is a digital version of the extremely popular land-based slot machine Elephant King. The undisputed king of the jungle might be the lion but the animal that towers over all of them on land is the mighty elephant. Let’s take a trip to Africa and come face to face with a herd of these magnificent animals who will hopefully reward you nicely before setting off on a stampede!

Elephant King is a 5 reel slot with 40 paylines that includes Stacked Wilds, Free Spins, and a Prize Disk feature. 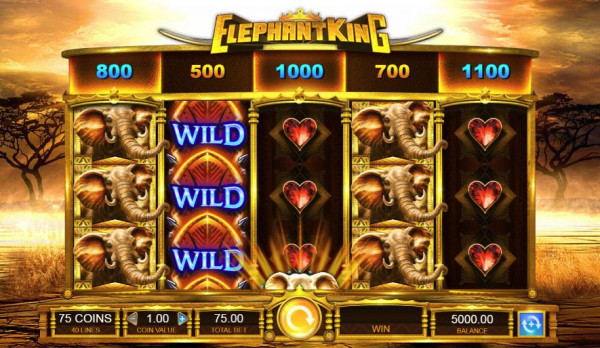 The first thing to highlight is the Wild symbol and this symbol is illustrated by a tribal shield. Like standard Wild symbols, it substitutes for all other symbols except the Scatter symbol to help form winning combinations. This symbol only appears on reels 2, 3, and 4 and comes stacked on the reels.

The Scatter symbol is represented by a large elephant surrounded by a golden circle. This symbol appears on reels 1, 3, and 5 in the main game. When this symbol appears in any position on the reels then it will trigger the Prize Disk feature. Symbols that are triggered by this feature will guarantee you a cash prize on every spin. The cash prize total that you have won is displayed just above the reels.

If the Scatter symbol lands on a reel that displays ‘Free Spins’ in the Prize Disk feature then you will trigger the Free Spins bonus game. In this feature for every Free Spins symbol you land, you will receive 10 Free Spins up to a maximum of 30 Free Spins. The Scatter symbol also appears on all 5 reels in Free Spins to further boost your chances of landing a nice big win on the reels. Furthermore, you can also land additional spins when the Extra Spins symbol appears. It is possible to win up to 250 Free Spins in total in this great bonus game. Lastly, make sure to keep a close eye on the Elephant, Rhino, Zebra, and Gazelle symbols as they award 2X multipliers when part of a Free Spin win.

The graphics are absolutely fantastic as the game immerses you in the savannahs of Africa straight away with a beautiful golden sky in the background and two huge Baobab trees displayed on opposite sides of the reels. Symbols are beautifully designed and consist of an Elephant, a Rhino, a Gazelle, a Zebra, a Shield, and some Heart/Diamond/Spade/Club icons. The animations are impressive as symbols spring into life when part of a winning combination and if you land a big win then you are treated to a cool sequence where a herd of elephants cover the entire screen as gold coins rain down beside them.

The music is excellent and features lots of animal noises and tribal sounds. It ties in really well with the wildlife theme of the game.


Our Verdict on Elephant King

This game is produced by software giants IGT and is an exciting safari trip to Africa. It is expertly designed, very fun to play, and contains a nice set of features to provide players with countless hours of entertainment. The Prize Disk feature is highly innovative and something that has never been done before. The only gripe I have about this feature is that it does not trigger frequently enough on the reels but when it does then the rewards can be massive. The top prize for this slot is a reasonable 533X your bet which can be won on each spin. I found this slot to be of Medium variance so you will notice that wins occur quite regularly the more you spin the reels. For slots with a similar Wildlife theme, check out King Tusk and Stampede.

Stomp your way to a massive payout in Elephant King!