Join a bunch of cute dragons high up in the sky as they flap and breathe fire on a mysterious stone plaque.
casino game review dragon wins nextgen gaming scientific games slots

Get ready to enter a fantasy world filled with 4 cute dragons! Dragons are mythical creatures that are quite large in size, reptilian in appearance, can spew fire at a moment’s notice and of course they have wings to let them soar the skies above! These fearsome animals are known the world over and have appeared in countless movies and tv shows down through the years. The names of Drogon and Viserion certainly spring to mind when I think of them! Popular software studio NextGen Gaming decided to release a slot all about these legendary creatures. Let’s see if the dragons in this game can really make those reels sizzle! 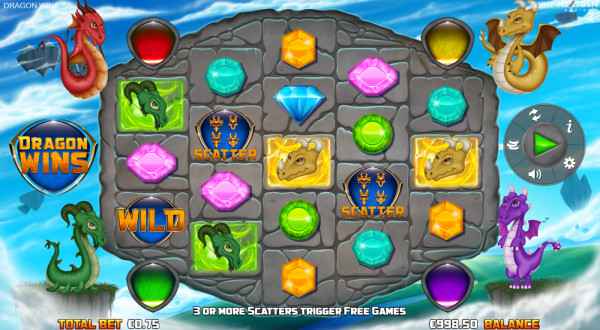 The first feature to highlight is that the game is played on a stone tablet that features a unique 3x4x5x4x3 layout consisting of 5 reels and 40 paylines. The Wild symbol is represented by a blue badge with the word ‘Wild’ inside of it. Like most Wild symbols, it substitutes for all other symbols except the Scatter to help contribute to winning combinations on the reels.

The Scatter symbol is depicted by a blue badge with the word ‘Scatter’ below it. This symbol is the highest paying symbol in the game as if you are lucky enough to land 5 of these symbols on an active payline then you’ll bag yourself a wonderful 2,000X payout! The Scatter symbol also triggers 1 of 2 Free Games features when you land 3 or more of these symbols on the reels and they are as follows:

As you play the game, you will notice a colourful meter beside each dragon. These meters fill up when you form winning combinations with a specific dragon. Once a meter fills up then you will receive 3 Dragon Spins and trigger one of the following Dragon Spins features:

If you manage to land 3 or more Scatters while in the Dragon Spins feature then you will retrigger even more Dragon Spins.

The last feature to highlight is Dragon’s Fire. This feature is a random event that occurs in the base game and triggers when one of the dragons breathes fire on the reels. When this happens, your winnings are subject to a nice 3X, 5X, or 10X multiplier.

The game is beautifully designed and features some amazing cartoon-like graphics. The slot takes place on a stone tablet that is floating high up in the sky with a lush green land below it. The dragons are nicely detailed and if you look closely you’ll notice that each one is different from the other. Symbols are wonderfully rendered onscreen and consist of the 4 Dragons and a colourful selection of gemstones. The animations are stylish as the dragons flap their wings beside the reels and symbols flash and enlarge whenever they are part of a winning combination.

The music is charming and features lots of banjo and soft piano sounds. It ties in really well with the adventure theme of the game.


Our Verdict on Dragon Wins

Leading software developer NextGen Gaming created this fantastic slot and it’s a joy to play and is visually stunning to look at, thanks to its amazing cartoon-like graphics. Dragon Wins is jampacked with a whole host of great features that will provide players with countless hours of entertainment. I really liked how the meters fill up for each individual Dragon the more you win which breaks up the gameplay nicely and I found the Green Dragon feature to be the most lucrative since it expands to cover whole reels. The biggest wins in this game come from the Wild Reels Free Games feature as it gives you the chance to land 3 Wild Reels on just one Free Game! I found this game to be of Medium variance so you’ll notice that wins are evenly distributed the more you spin the reels.

Dragon Spin your way to a massive fortune when you play Dragon Wins!