Dragon Shard from Stormcraft Studios: Slot Review - a slot of fire and ice!

Step foot inside a fantasy realm where an eternal battle rages on in this new title from Stormcraft Studios in association with software giants Microgaming. This slot centres on a mysterious and ancient artifact known as the Dragon Shard. It is said that those who come into possession of it will be imbued with powers over all of the elements as well as ultimate dominion over the entire land. The war rumbles on here as the elemental forces of the Fire Queen and the Ice King face off against each other as they seek out the shard for themselves so that they can vanquish all their enemies in one fell swoop. Read on to see if finding this elusive magical item on the reels will lead to an even bigger magical cash payout? 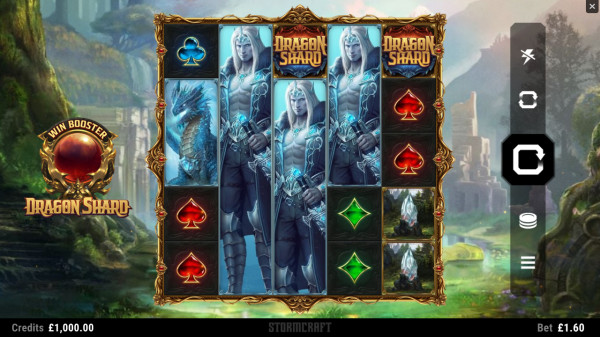 The first feature to highlight is that this game utilises an additional bonus bet feature referred to as Win Booster. This feature is extremely popular with players as it can also be seen in the hit Stormcraft Studios slot Fortunium and involves increasing your total bet to make the paylines pay both ways. Mystery symbols can randomly appear on the reels in this game to transform symbols into low, high, or Wilds. With the Win Booster turned on then it will also boost these symbols appearing on the reels to reveal only Wilds or high paying symbols. A word of warning though, the Win Booster feature will cost you 2X your stake to activate.

Symbols in the game come double stacked on the reels with the Fire Queen and Ice King symbols appearing stacked up to 5 symbols high. They are also two of the most rewarding symbols in the game as they will award a nice cash payout worth 8X your stake for landing 5 of them on an active payline. An image of the game logo is the Wild in this game and like most Wilds, the main job of this symbol is to replace all other symbols except the Scatter to help create winning combinations on the reels. It is also quite lucrative as if you happen to land 5 Wilds on a payline then you will be awarded a fine cash payout worth 20X your bet.

The Scatter symbol in the game is illustrated by an image of a purple eye. This symbol is key to activating the Free Spins feature but is also the most valuable symbol as if you manage to hit 5 of these symbols on an active payline then you’ll be smiling big time with a massive cash prize worth 100X your wager! To trigger Free Spins, you will need to land 3 or more of these symbols in any position on the reels. Once in Free Spins, you will be awarded 10 Free Spins with each Free Spin featuring Mystery Reels on reels 2, 3, or 4. The more Scatters you land to trigger Free Spins then the more Mystery Reels become active. For example, 3 awards 1 Mystery Reel, 4 will get you 2 Mystery Reels, whereas 5 awards 3 Mystery Reels. Mystery Reels contain only Mystery Symbols here and each time you land a Scatter while in this feature then you will be awarded an Extra Free Spin.

The presentation of the game is visually stunning as it is set in a fantasy realm full of trees, waterfalls, mountains, and old ruins. You can just sense there is a battle brewing here and it’s clearly inspired by fantasy titles such as Game of Thrones and Lord of the Rings. Symbols in the game are expertly designed and full of detail. They consist of the Fire Queen, the Ice King, a Fire Dragon, an Ice Dragon, the Dragon Shard, along with classic playing card Hearts/Diamonds/Spades/Clubs icons. The animations are on point as symbols fly down the reels and shine brightly when part of a win. It is particularly exciting when the ‘?’ Mystery Symbols appear as they proceed to magically transform into other symbols to further boost your chances of landing a big win on the reels.

The music features an epic and soaring soundtrack which increases in tempo the more you play. It fits in extremely well with the Fantasy theme of the game.


Our Verdict on Dragon Shard

This game comes from Stormcraft Studios in partnership with Microgaming and is a wonderful and exciting gaming experience set in a magical kingdom far far away. Featuring outstanding graphics, the perfect matching soundtrack, along with a nice range of bonus features, it’s one fantasy themed slot that’s definitely worth checking out. The Mystery Symbols ensure players are kept on their toes with every spin and can be extremely lucrative especially with the Win Booster feature turned on. The standout feature of this slot is the Free Spins bonus game which will take you a few spins to trigger but it is worth the wait as you can benefit from not only extra Free Spins but also up to 3 Mystery Reels filled to the brim with lots of lucrative Mystery Symbols! The top prize for this game is a decent 800X your wager which can be won by filling all of the reels with Wilds. It’s a Medium variance slot so you will find that wins are evenly distributed the more you play. For slots with similar Fantasy theme, check out Dragon Horn and Dragon Maiden.

Fire or Ice? You decide who rules the kingdom once and for all in Dragon Shard!