Put on your best dancing shoes as top software provider Booming Games invites you to a disco where the party is in full swing! If you love bopping the night away under a glittering disco ball to some funky dance music then this slot was definitely created with you in mind. Join us as we put our best platform boots forward to hopefully dance our way to a big cash prize in this disco-inspired online slot. 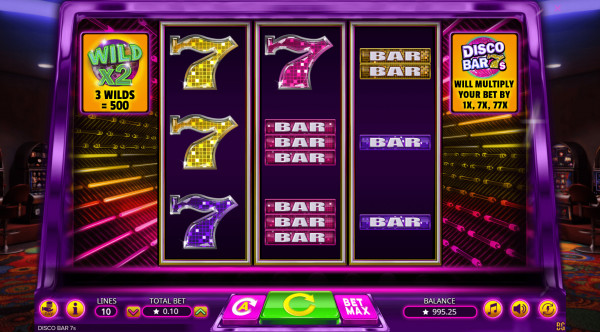 Disco Bar 7s features a highly innovative bonus feature called Mix ‘n’ Match which allows you to form winning combinations by using non-identical symbols. This means that any Lucky Seven symbols pay out, any Bar symbols pay out, and there are several colour combinations of different symbols that also pay. For example, one of the biggest winning combinations you can achieve is landing 3 different coloured Lucky Seven symbols on a payline, this will award you a nice cash prize worth 200 coins which will then be multiplied by your total bet.

The Wild symbol is represented by a dazzling disco ball. This symbol substitutes for all other symbols except for the Scatter symbol to help form winning combinations on the reels. Keep your eyes peeled for this symbol when it appears as it is the highest paying symbol in the game. Land 3 Wilds on an active payline and you will be dancing out of the disco hall with 500 coins in your pocket! Another neat feature of this symbol is that it doubles all wins that it is a part of and if you happen to form a winning combination with 2 Wild symbols then your win will be quadrupled!

The Scatter symbol is denoted by an image of the game logo and this symbol can appear anywhere on the reels. Unfortunately, it does not trigger Free Spins or a Bonus Game feature but it does pay out massive multipliers prizes. Collect 1, 2, or 3 Scatters on the reels to receive multipliers worth 1X, 7X, and a massive 77X!

The presentation of the game is quite flashy as it takes place inside a Las Vegas-style casino surrounded by bright neon lights and a stylish purple frame. Symbols are a nod to classic fruit machine slots of the past as they consist of a variety of different coloured Lucky Seven and Bar symbols with a Wild Disco Ball symbol thrown in good measure! The animations are crisp as symbols speed up and down the reels and dazzle brightly when part of a winning combination.

The music as you might expect is a funky disco soundtrack. It ties in perfectly with the disco theme of the game.


Our Verdict on Disco Bar 7s

This entertaining slot comes from London based software studio Booming Games. It is quite fun to play, features dazzling graphics with a funky soundtrack, and has a reasonable amount of features to keep playings bopping away below the disco ball for quite some time! I created quite a few wins thanks to the original Mix ‘n’ Match feature but sadly the Scatter symbol did not appear that often on the reels to really boost and multiply those payouts. It would have been nice if this game had more bonus features or even Free Spins to make it that bit more exciting to play. When it comes to variance, I found this slot to be Low which means that you won’t have to wait too long to claim a decent cash payout in this slot. The top prize for Disco Bar 7s is a reasonable 750X your wager which is definitely worth putting on your dancing shoes for! For slots with a similar disco theme, check out Joker Pro and Spin Party.

Dance up a storm to win cash prizes galore when you play Disco Bar 7s!