Joker Pro from NetEnt: Slot Review - a game that will make you smile!

Take a trip to a funky disco where a jester is holding on to a huge jackpot!
casino game review joker pro netent slots

This game is all about taking players back to the 1980s when disco nights were at their most popular. It is a tribute to classic slots of the past and an interesting aspect of this game is that it only has 10 paylines. If you like disco music and bopping away under a disco ball all night then this slot should be right up your alley.

It is a 5 reel slot game that features respins and sticky wilds. 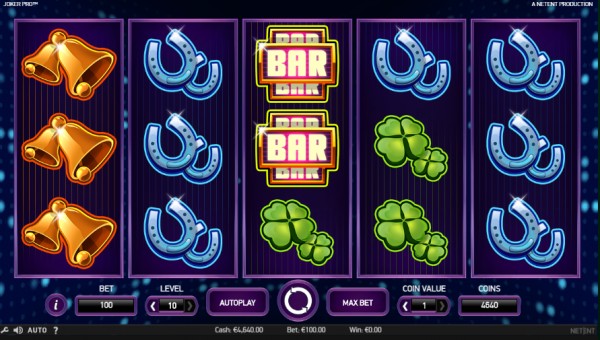 The first feature that I came across while playing this game was the Wild Symbol which is depicted by a flaming hot Wild logo. This symbol substitutes for all other symbols in the game except the Scatter symbol.

The Scatter symbol is illustrated by a funky looking jester hat and if you land two or more of these symbols on reels 2, 3, or 4 then you will trigger the Joker Pro Respins feature. During this game, reels 1 and 5 will turn wild and 3 Hot Spot positions will pop up in the middle of reels 2, 3, and 4. The original Scatter symbols that triggered the feature will turn into sticky Wilds as the reels respin.

The graphics are crisp, clean, and very futuristic looking. The backdrop of the game sparkles and glistens with bright blue neon lights. The symbols run smoothly along the reels and they move at a frantic speed. Symbols consist of lucky sevens, liberty bells, and diamonds. It is a nice nod to old fruit machine slots of the past. There are not that many animations to mention but the symbols dazzle with a bright light when they form part of a winning combination on the reels.

The music is soft techno, it creates a nice mellow atmosphere as you play the game and it suits the game superbly.


Our Verdict on Joker Pro

Joker Pro is produced by NetEnt and it’s a fast-paced slot that is full of excitement as the reels move at a blistering pace. Admittedly, it does not have that many features but the respins provide lots of replay value and many hours of entertainment. I was able to trigger this feature on more than a few occasions while playing this game. It is also worth highlighting that it is a Medium variance slot so don’t expect big wins to come frequently but when they do, they are definitely worth it!

Sparkle under some disco lights in Joker Pro!