Cowboys & Aliens from Playtech: Slot Review - a six-shooter or an alien blaster?

Battle to save humanity with Zeke and Verity as they take on some ferocious aliens in the Wild Wild West.
casino game review cowboys & aliens playtech slots

This game is based on the hugely popular comic Cowboys & Aliens that was released all the way back in 2006. The comic features a highly original concept which is what would happen if Aliens attacked Earth when the Wild Wild West reigned supreme? The comic was such a huge success that it was released as a blockbuster movie in 2011 starring Daniel Craig, Olivia Wilde, and Harrison Ford. Unfortunately, the movie was not as well received as the comic but still made a tonne of money at the box office as it grossed over $174 million worldwide. Let’s see if this online slot will fare any better than the movie.

Cowboys & Aliens is a 5 reel slot game with 9 paylines and includes Free Games, and 2 features: Alien Weapon and Alien Attack. 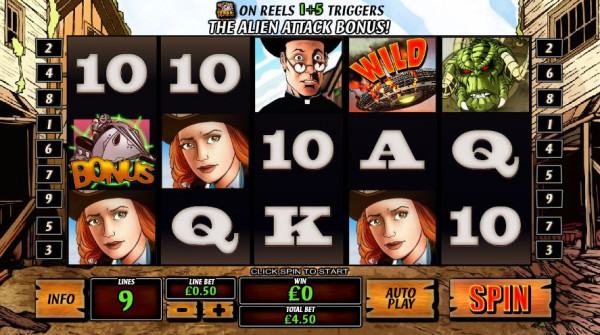 The first feature to discuss is that the game features an Any Adjacent Pay system. This basically means that wins can occur not only from left to right but also from right to left which should greatly enhance your chances of landing a big win.

The Wild symbol is illustrated by a huge spaceship with the word ‘Wild’ displayed in front of it. Similar to most Wild symbols, it substitutes for all other symbols on the reels except for the Scatter and Bonus symbols to help form winning combos on the reels. This symbol is also the highest paying symbol in the game as if you happen to land 5 of these symbols on an active payline then you’ll be gunslinging your way to a massive payout of 10,000 coins!

The Scatter symbol is represented by the game logo and if you manage to land 3 or more of these symbols anywhere on the reels then you’ll trigger the Free Games bonus game. In this feature, you’ll be awarded 8 Free Games and a highlighted rectangle will appear on every spin. When the reels stop, the area where the rectangle is placed transforms into a bunch of Wild symbols which really boosts your chances of landing a nice payout on the reels.

The Bonus symbol depicting an Alien type of gun is used to trigger the Alien Weapon feature. When this symbol appears on reel 1, the small triangle on the alien gun will spin and randomly pick a number from 1 to 4. The number you receive is a number of random symbols that the gun will shoot at in this feature. Symbols that have been shot will then transform into Wilds. Only symbols on reels 2, 3, 4, and 5 can be shot and the Scatter and Wild symbols cannot be shot.

The final feature to highlight is the Alien Attack bonus game. This is triggered when you land the Bonus symbol of a man riding an Alien type of spacecraft on reels 1 and 5. This fun mini-game involves fending off 3 waves of alien attacks as you have to choose which aliens to try and kill with 3 different characters. The characters include Verity, Zeke, and an Indian Warrior with each one having a different weapon and a varying degree of accuracy:

The graphics are very impressive as the game is presented with a crisp comic-book style and is set in a small western town that looks ravaged by repeated alien attacks. Symbols are wonderfully designed and are images taken straight from the popular comic book. The symbols consist of characters from the comic such as Zeke, Verity, an Indian Warrior, an Alien, a Priest, as well as the standard A – 10 icons. The animations are top-notch as symbols burst into life when you land a win and trigger a cool movie-like snippet when a character symbol is part of a winning combination. I really enjoyed playing the Alien Attack feature as it takes place on a whole new screen and blasting aliens in this game has never been so much fun!

The music is dramatic, atmospheric, and country-based as you might expect. It sits in perfectly well with the western/sci-fi theme of the game.


Our Verdict on Cowboys & Aliens

This highly impressive slot is made by Playtech and I am happy to report that it’s a fantastic tribute to a genre-defining comic book. The game features some amazing comic-book style graphics, has a nice set of bonus features and is super easy to play. I was able to trigger the bonus features quite frequently when playing with the Free Games feature being the most profitable thanks to added wilds on every Free Game spin. The only downside to Free Games is that unfortunately you cannot retrigger more of them. The Alien Attack feature is great fun and I recommend players choose the Indian Warrior for each attack since you get a decent amount of ammo and accuracy for this character. I found this game to be of Medium variance so you’ll notice that big wins do not occur too much as you spin the reels. For similar slots based on comics, check out Justice League and Daredevil.

Win more than a fistful of dollars when you play Cowboys & Aliens!