Join the Justice League as they try to stop an unstoppable foe from taking over the planet.
casino game review jackpot slots justice league playtech slots

Superhero movies are as popular as ever as Marvel and DC look to expand their comic-book franchises by weaving intricate universes in order to create as many spinoff movies as possible. As a result of this, new superhero movies are released on a yearly basis and it does not look like the trend will be slowing down anytime soon. This latest release from software giants Playtech was launched to coincide with the recent release of the blockbuster DC movie Justice League. This movie is DC’s equivalent to the smash hit Marvel Avengers movies as it focuses on the most popular DC superheroes who need to put their differences aside and team up together to take on an unstoppable enemy who is hellbent on taking the Earth all for himself. Get ready to unite the league and join Batman, Superman, Wonder Woman, Cyborg, Aquaman, and the Flash as they battle to save our world. 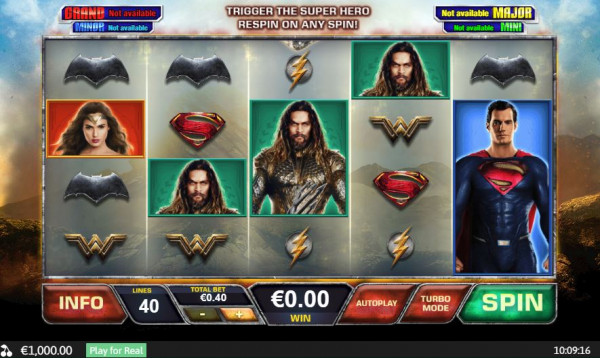 The first feature to mention is the obligatory Wild symbol and it is illustrated by the slick looking Justice League logo. This symbol substitutes for all other symbols except the Scatter symbol to help form winning combinations. It is also the most valuable symbol in the game as if you land 5 of these symbols on an active payline then you will receive a superhero-sized payout of 750 coins! Along with each Superhero symbol, the Wild can appear fully stacked on the reels.

The Superhero Respin feature is a random event that occurs in the main game. When activated, a frame will turn bright red on the reels and when 1 of the Superhero symbols lands in it then it will become Wild and give players another spin. It is actually possible to land 5 consecutive Respins in a row with this nifty feature but this will only happen as long as different Superheroes keep on turning Wild.


The last feature to discuss is the set of 4 Progressive Jackpots. These Jackpots are part of the DC Superheroes Jackpots network and can be won at any time on any spin. The jackpots consist of Mini, Minor, Major, and Grand and the higher the bet you place increases your chances of winning one of these jackpots. Once triggered, you are taken to a new screen where you pick some jackpot symbols in order to reveal which jackpot you have won.

Justice League features a slick presentation as the game is set among some smoldering ruins where Steppenwolf and his army of Parademons no doubt stomped their way through. The symbols are beautifully rendered on screen and consist of the various members of the Justice Leaguer along with some of their famous superhero logos. The animations are visually impressive as symbols spring into life and rotate nicely when part of a winning combination. They really come into their own when you land a big win as the screen is splashed with gold bars and coins. It is a really cool sequence.

The music is dramatic and atmospheric and taken straight from the Justice League movie soundtrack. It ties in perfectly with the superhero theme of the game.


Our Verdict on Justice League

Renowned software studio Playtech produced this hugely impressive slot. Having seen Justice League and been a DC fan for many years, I am happy to report that it is a faithful adaptation of the movie. This game not only looks the business but is super easy to play and full of amazing bonus features. It is fantastic there is so much variety when it comes to Free Spins games and that each superhero is given a fair share with their own dedicated Free Spins feature. I found the Batman Free Spins game to be the most profitable as you can land Stacked Wilds on every spin, it is just a shame you cannot retrigger more. It is also satisfying to know that you can win a Progressive Jackpot on any spin including non-winning spins which should appeal to all jackpot hungry players out there. I found this game to be of High variance so you will need a decent bankroll to start off with before you start seeing a nice return.

Unite the league to land a superhero-sized payout when you play Justice League!