Take down criminals with Daredevil and see exactly what it is like to be the man with no fear!
casino game review daredevil jackpot slots playtech slots

This game is based on the superhero film Daredevil that was released back in 2003. This movie was mauled by critics but it made a decent return at the box office and it did Ben Affleck no harm considering he is Batman now! Daredevil centres on a blind lawyer named Matt Murdock who fights for justice in the courtroom by day but dishes out his own form of justice at night when he puts on his Daredevil mask. Matt was blinded as a child by some toxic waste and gained heightened senses as a result of it. In the movie, he has to stop the crime lord Kingpin as well as the assassin Bullseye all the while trying to keep up with a mysterious assassin known as Elektra.

It’s a 5 reel slot game with 20 paylines and it includes free games, a bullseye feature, and some progressive jackpots. 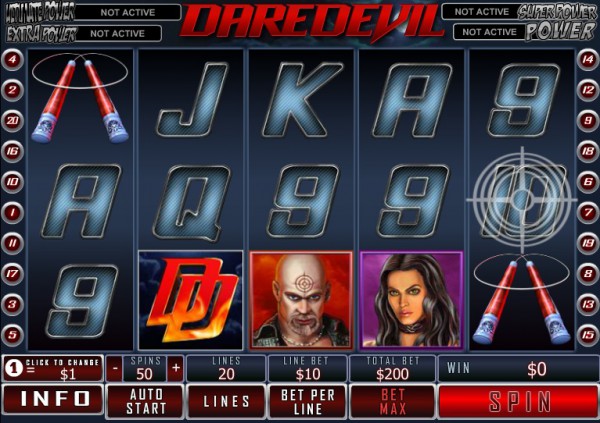 The first feature to highlight is the Wild symbol, it is denoted by an image of Daredevil. It substitutes for all other symbols except the Scatter symbols and it is the highest paying symbol in the game. Manage to land 5 of these symbols across the reels then you will be awarded a fantastic payout worth 5,000X your line bet!

The Bullseye feature is a really cool addition to this slot. It involves selecting a symbol on the reels with a bullseye target and if the Bullseye symbol lands beneath the target then you will win 3X your total bet. This feature is only active in the main game.

The infamous Daredevil logo is the Scatter symbol and if you land 3 or more of these symbols anywhere on the reels then you will activate the Free Games feature. You will be awarded 10 free spins along with some random Wilds. After every free spin, Daredevil will use his radar ability to transform some symbols into Wild symbols. Up to 3 symbols will be turned into a Wild for every spin. This feature provides scope for some big payouts provided you land the appropriate symbols on the reels.

The last feature to highlight is the Marvel Multi-Level Mystery Progressive Jackpot. It consists of 4 progressive jackpots: power, extra power, super power, and ultimate power. All of these jackpots are won randomly and any spin of any amount can win entry to a jackpot game including non-winning spins. The higher the bet you place, the bigger the chances of entering this game. When in this game, you will be guaranteed a win in at least 1 of the 4 jackpots.

To be honest, I was a bit disappointed with the graphics of the game as they look a bit dated compared to other movie-based slots. The symbols could definitely do with a fresh lick of paint, especially Daredevil as he seems to be smiling in his symbol whereas the real Daredevil looks intimidating and aggressive. The symbols consist of Daredevil, Kingpin, Elektra, Bullseye and some weapons such as Daredevil’s famous Billy Club. They run smoothly along the reels and animate brightly when you land a win.

The music is a bit techno especially when you are viewing the paytable. It does not really suit the game that well as I expected it to be a bit heavier than techno.


Our Verdict on Daredevil

Daredevil is made by Playtech and it’s a lot more fun than the movie that is for sure! It has some interesting features and to be honest I did enjoy the Bullseye feature, it is definitely a feature that more software developers should incorporate in future games. It is also nice that you can retrigger additional free games in the Free Games feature infinitely. It’s a Medium variance slot so you won’t be waiting too long for a decent payout with this game.

Rain down justice on criminals with Daredevil!