Cloud Quest by Play'n GO is a slot game that has loads to offer. Free spins are only one of many bonus features available in this Play'n GO slot machine. Read the full review here, at GamingRevolution.
casino game review cloud quest play'n go slot machine slots

The usual features form part of this 5-reel and 5-row slot game. Players can simplify their game play by clicking max bet, auto spin and can gain greater insight into how their winnings will come about by clicking on the paytable.

The symbols are highly detailed, which reassures players of the over-all quality of the slot machine. Some serious effort went into creating this game - that is for sure. The slot machine is available for mobile and loads just as seamlessly as on a desktop. 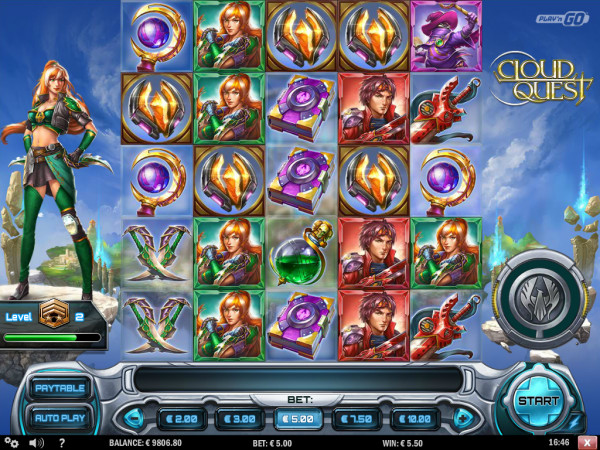 Broadly, Cloud Quest can be divided into a base game and several levels. Of course, the better features are available the higher levels. In the base game, players should look out for the ‘Super Power’ symbol. As is common in Play'n GO’s slot machines, the amount of ‘Super Power’ symbols determines the outcome. Imagine getting five of these symbols: this will activate three sections of the reel, enhancing a player’s potential to win immensely.

During the different levels, it is the aim to defeat the monster. Along the journey, players will encounter an array of features that are pretty cool. One of the greatest features is the bonus row surprise. A certain row is declared a bonus row at random, and if all five symbols are cleared in that particular row, players of Cloud Quest receive five to twenty free spins. These free spins are played on three reels and if another 25 symbols are cleared on that grid, then the player receives an additional special cash prize, called the ‘Kingdom of Honour’.

Upon first glance, Play'n GO slot machine Cloud Quest makes a great impression. The background depicts bright skies and what could be described as a fantasy fortress. Not only does Cloud Quest's superhero theme appeal to many players, but its colour combination is also great for concentration and mood-bosting.

Players of this slot game can play from 0.10. 40.00 a spin is the maximum, which is rather high, and subsequently risky. Given that a staggering 2,500 times a player’s stake is available, it might be worthwhile to invest a little more. As per usual, I would advise taking each spin at a time. Set a little percentage of your winnings aside each time, and then increase incrementally, so that you will always be left with some pretty decent winnings, yet, can experience the thrill of risking higher amounts.

Our Verdict on Cloud Quest

Cloud Quest falls in line with what I have come to expect from Play'n GO - that is great graphics, and exciting features. This slot game is feature-packed, making it much more interesting than some of the traditional slot machines, which only produce wins upon a player receiving three or more of the same symbols. Indeed, the name sums it up nicely, this isn't a cloud-themed game. To be precise, it's all about the quest.