Cleopatra II from IGT: Slot Review - an update of a true slot classic

This review by GamingRevolution has considered IGT's video slot Cleopatra II: The newer version of Cleopatra, the slot classic. The free spins feature is much more sophisticated and the multiplier can result in much bigger wins.
casino game review cleopatra cleopatra II igt slot machine slots

As a result of the great popularity of the classic slot game Cleopatra, IGT decided to revamp the game and develop a newer version. Cleopatra II is a 5-reel video slot game situated in Egyptian times with 20 paylines. Her green eyes greet players to the game, which is said to be one of the most popular slot games ever. 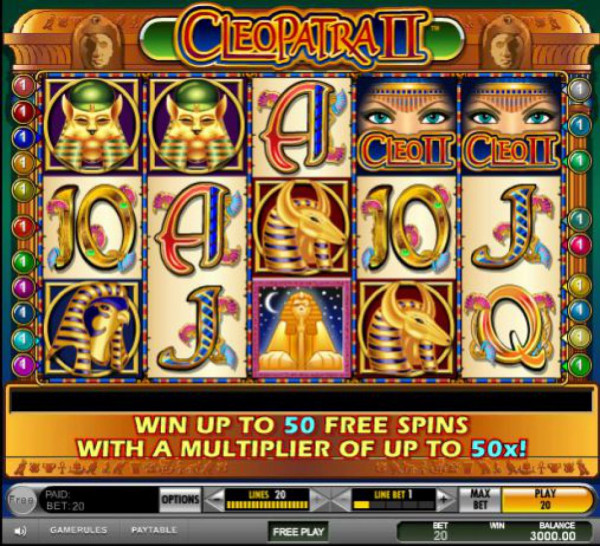 As noted, this game does not come with overly complex features. It does, however, include the Cleopatra II symbol. This symbol is the wild symbol in this game. The winnings are doubled whenever a player gets a winning combination containing two wild symbols.

Her green eyes greet players to the game, which is said to be one of the most popular slot games ever. Cleopatra II strikes players as much less sophisticated than most contemporary slots. The bold symbols, the almost one-dimensional appearing design and the somewhat outdated Egyptian theme, which was popular in the nineties, somehow adds to the charm of this game, which is also available in land-cased casinos.

At 100.00 a spin, this IGT slot allows for players to risk it all. This, however, may not be the safest bet, given that in contrast to Cleopatra, this newer version has higher variance. While the wins may be slightly bigger, they will not come as often. Cleopatra really lends itself for a few spins at an affordable cost, rather than that one big spin, which may come to nothing. The Autospin functionality is particularly useful if you choose to give Cleopatra II more than just a single spin.

Our Verdict on Cleopatra II

Of course, the graphics are outdated. This does not take away from the appeal of playing this classic slot, which pretty much remained (almost) the same as its earlier version. The main difference is that this slot has added a little, really just a little, sophistication with its free spins feature. This feature also includes a very good multiplier. Players used to modern slot games may like this version of the IGT slot a good bit more than the older Cleopatra version.