Andre the Giant from NextGen Gaming: Slot Review - lace up some wrestling boots!

Prepare to step into a wrestling ring and face off with the biggest wrestler of all time....Andre the Giant!
andre the giant casino game review nextgen gaming scientific games slots

This game focuses on one of the biggest wrestlers to ever grace a wrestling ring....Andre the Giant! Standing at over 7 feet tall and weighing over 500 lbs, the man was larger than life in a lot of ways! Wrestling fans still adore him to this day and he is remembered quite fondly for his role as the giant in the comedy movie A Princess Bride. So get ready to lace up some wrestling boots and attempt to wrestle a giant!

The game is a 5 reel slot with 25 paylines and it includes features such as Andre Goes Wild, Battle Bout and a Gamble game. 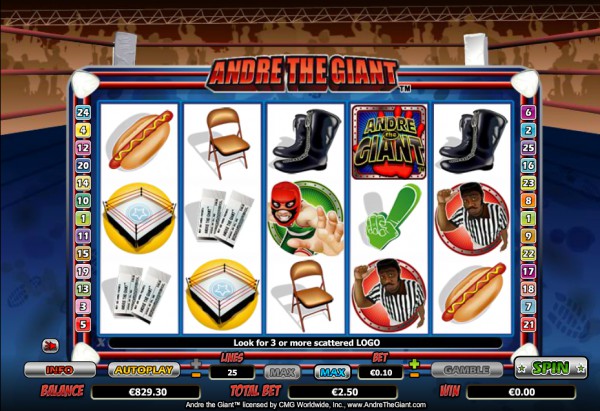 Top Casino for Andre The Giant

The first feature to highlight is the Wild symbol and this is denoted by a picture of Andre. It substitutes for all symbols except the Scatter symbol. If this symbol appears on reels 2 and 4 then it will expand to fill all positions on the reels it shows up on. The highest paying symbol in this game is the masked wrestler and if you land 5 of these symbols then you will be treated to a payout of up to 5,000 coins!

The Scatter symbol is denoted by the game’s logo with a big red hand presumably based on Andre’s in the background. If you manage to land 3 or more of these symbols across the reels then you will trigger the Battle Bonus feature. You are awarded 10 Free Spins in this game and you can collect Special Attack icons on reel 5 to use on Andre when he enters the ring. Each time, you successfully attack Andre then you will be given additional free spins and 3 successful attacks will trigger Andre’s Finishing Move and you will win a bonus prize of up to 20X the total bet placed. Not a bad reward for slaying a giant there!

The game has a nice cartoon-like quality to it and the graphics are bright and colourful. It has a real retro feel to it.The backdrop is the centre of a wrestling ring with a packed audience. The symbols tie in well with the theme of the game and they feature wrestling boots, wrestling belts, chairs, hot dogs and even a Lucha-style wrestling mask. Symbols run along the reels smoothly and are displayed against a bright white background. The Wild symbol animates nicely as the hand opens and closes when you form a winning combination on the reels.

The music is rocky and quite loud but it adds nicely to the atmosphere of the game while playing. A nice throwback to old school wrestling music there.


Our Verdict on Andre the Giant

Andre the Giant is made by NextGen Gaming and it’s a trip to a wrestling ring you won’t forget anytime soon! The Battle Bonus is a really cool feature and it ties into the theme of the game fantastically well. One minor gripe of this feature is that it cannot be retriggered. It is a Medium variance slot and very easy to get into but quite hard to stop when you start to spin those reels!

Defeat a Giant and win big with Andre the Giant!