This game clearly takes inspiration from the famous Hanna-Barbera cartoon series "The Flintstones". The name of the game says it all really! In the original cartoon, you meet two families who live beside each other in prehistoric times when dinosaurs existed in tandem with humans. This game takes a slightly different approach as instead of Mr Flintstone who works in a rock quarry, we meet Mr Winstone who runs a resort and casino alongside his wife and trusty woolly mammoth. The family even employ a dinosaur who works as a live dealer inside the casino!

Winstones is a 5 reel slot game with 25 pay lines and it comes with features such as Multipliers and Free Spins. 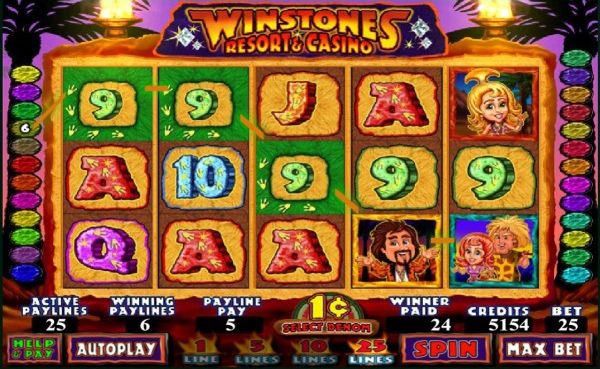 The first feature to highlight is the Wild symbol and this symbol is denoted by the Winstones game logo. It substitutes for all other symbols except the Scatter symbol. When this symbol is part of a winning combination on the reels, the payout is doubled. So make sure you keep an eye on this symbol as you can bag some big wins by landing as many of these symbols as possible.

To be fair, the graphics are little dated when compared to more modern slots and it is clear to see that nearly all of the characters are heavily inspired by “The Flintstones” cartoon show. The game is set against a purple night sky complete with palm trees and flaming torches adorning the top of the reels. Symbols are nicely detailed and consist of Mr and Mrs Winstone, their neighbours, a dinosaur, a woolly mammoth, and the usual mix of A – 9 symbols that are neatly displayed on some stone tablets. The animations are very slick as symbols enlarge and flash brightly when you form a win along the reels.

The music is simple and bouncy with lots of loud trumpet sounds. It complements the playful theme of the game quite well.


Our Verdict on Winstones

This slot is produced by Roxor Gaming and it is a fun-filled trip back to prehistoric times where humans and dinosaurs happily coexisted together. Admittedly, the game does not contain that many features but the presentation of the slot along with the highly profitable Free Spins feature provides excellent replay value. The game is of Medium variance so it won’t take you too long to land a decent payout along the reels. Get ready to check into this resort for a rocking good time!

Win more than a bag of rocks at the Winstones resort and casino!