Miss Kitty from Aristocrat: Slot Review - this rich kitty shows you how to live

Miss Kitty, developed by Aristocrat, may seem strangely familiar to some, despite never having played it online. The slot game is super popular in land-based casinos, from Baden-Baden to Las Vegas.

The slot game has 5 reels and 50 paylines. Sounds pretty standard, but is quite a lot of fun, as the great popularity of this Aristocrat slot game, and other similar titles by the same software provider, contests. 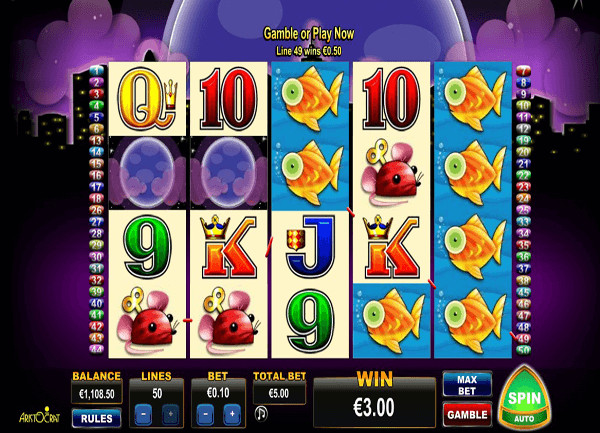 Miss Kitty isn’t your average cat. She wears a diamond necklace, she looks urban and filthy rich. It’s only suitable that the Miss Kitty symbol is the wild in this game, substituting other symbols to form a winning combination. Even better, the wild kitty in this game is sticky, meaning it stays put for all free spins rounds. Imagine this, the whole screen could potentially be filled with Miss Kitty.

Free spins in this slot game are awarded if a player receives at least three moon symbols. First, a player gets 10 free spins, but a further five spins can be triggered during the free spins rounds upon receiving three more moon symbols. This is, of course, an extra. In contrast to most slot games, however, this is a fairly low number of free spins. Yet, often it is incredibly tricky to achieve the high numbers of free spins advertised in some games. For that reason, Aristocrat’s free spins feature may not sound overly profitable but can offer solid chances on some good winnings.

A less conventional symbol is the goldfish (of course, there is a goldfish in the clever kitty-themed slot game), which allows winners to win on all 50 paylines simultaneously.

The graphics that await players are super sleek, the bright purple and the pink-ish background looks fresh and modern, the kitty cat, which is the main character, is expertly designed, to resemble something out of a Disney movie.

With a payout rate of 94.94%, the potential winnings in Aristocrat's Miss Kitty are mediocre. In the regular gameplay, they potential winnings are acceptable, while the free spins feature brings this rate up. With this in mind, Miss Kitty is more suitable for leisurely play, and less so for high rollers, who wish to make some serious money and are also willing to risk large sums. Given the pleasant theme, you want to make sure to prolong your gameplay for as long as possible. A lower to median stake seems like a good starting point. Once you have familiarised yourself with the game, potentially won a little, you might want to consider risking a little more.

Our Verdict on Miss Kitty

Miss Kitty is arguably a popular slot game as it reminds players of the good ol' fruit machine, without the fruit. The potential winnings aren't all too high, but the fun and the graphics are very cool. It's rather simple, includes only few bonus features; most importantly, it runs smoothly and never encounters any errors. This is expert design.