Winfall Wishes from Gamesys: Slot Review - a lamp worth finding!

Find the golden lamp and see how many wishes the Genie might grant you.
casino game review gamesys slots winfall wishes

This game is exclusive to Virgin Games and it is clearly inspired by the Middle Eastern tale of Aladdin. The slot focuses on retrieving a mystical golden lamp and rubbing it a few times until a magical genie appears. The genie is said to grant any user who awakens him three wishes so your first wish should be a nice payout when you play this slot!

It is a 5 reel slot game with 25 paylines and features raining reels, free spins, and stacked wilds. 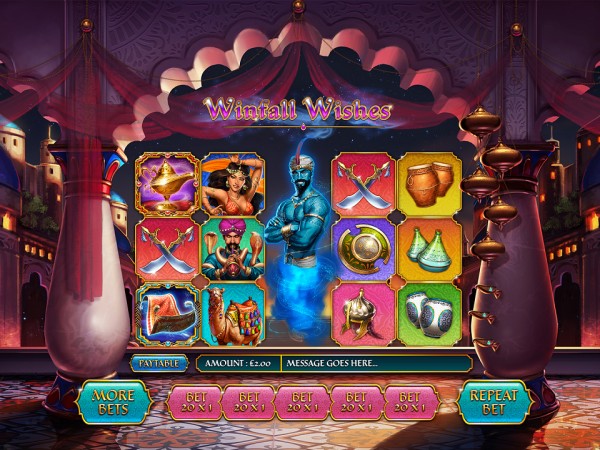 The main feature of this game is that it features raining reels. These kinds of reels are also known as cascading reels. Instead of symbols landing into place along some reels, the symbols tumble down upon each other. When you form a winning combination, the winning symbols will disappear leaving space for new symbols to drop down and fill the gaps. This greatly enhances your chances of a big win and it is a really fun way of playing slots.

The Wild symbol is illustrated by an ornate golden lamp. This symbol substitutes for all symbols except the Scatter symbol which is depicted by a floating magic carpet. When you land a win that causes a whole vertical reel of symbols to rain down, a symbol will be replaced by the Wild symbol and it will become stacked as the lamp will turn into the blue genie. Stacked Wilds give you a much better chance of winning as the whole reel transforms into one large Wild symbol. Unfortunately, Stacked Wilds only last for a single raining reel but they can also be created during a win from an existing Stacked Wild just as long as the win covers a whole vertical line.

This game also features a Free Spins mode and it is triggered when you land 4 or more raining reels with a single spin. A purple block will display the amount of Free Spins that you start this feature with. A nice thing about Free Spins is that you can win additional Free Spins while in this feature and it is also possible to win up to 25 Free Spins.

The game is beautifully designed as the slot is played out in an exotic setting inside a grand palace. It has a really Middle Eastern flavour to it. The symbols are colourful and animate nicely when they rain down upon each other. Each time that you form a win, symbols will disappear in a flashy purple haze of smoke.

Sadly, there is no music in this game but there are quite a few interesting thud effects as symbols fall down and hit each other. It would have been nice to hear some Arabian style music to compliment the game but you can’t have everything now!


Our Verdict on Winfall Wishes

Winfall Wishes is produced by Gamesys and it is quite a fun slot to play. The raining reels are a definite highlight of this game and it should keep players entertained for many hours. Although the game does not contain that many features, the Free Spins mode offers great replay value, and the fact that you can win additional Free Spins is a huge bonus.

Rub the lamp in Winfall Wishes and see what fortune awaits you!