This game is based on the popular works of famous English crime novelist Agatha Christie. For those that don’t know this extremely popular author, here is a little insight for you, Guinness World Records lists Agatha Christie as the best-selling novelist of all time. Her novels have incredibly sold over 2 billion copies! Only Shakespeare’s works and the Bible have sold more. Some of Christie’s most famous creations such as Miss Marple and Mr Poirot are in this game so let’s dive in and see how the mystery unfolds!

It is a 5 reel slot game with 50 paylines and it features Free Spins, sticky Wilds, and a Lock mode. 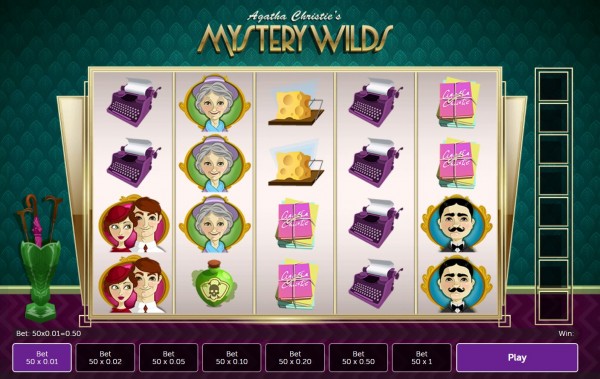 The first feature I noticed while playing this game is the Wild symbol and this is depicted by a magnifying glass with a green background. It is the highest paying symbol in the game alongside the Miss Marple symbol and if you land 5 of these symbols across the reels then you will be awarded a wonderful 200 coin payout.
The Question mark symbol is a mystery Wild symbol and when it appears on the reels, it will reveal a random symbol to further enhance your chances of a big win. So make sure to keep on eye on this symbol when playing. As you play the game, you will notice a meter to the right side of the reels and this fills up whenever you land a Wild symbol. When you land 8 Wild symbols on one spin and fill up this meter then you will trigger the Free Spins bonus game.

In this bonus game, the object is to pick 5 books from Agatha Christie’s famous collection to find clues and to reveal how many free spins you have won. Any clues that you find will be added to the Clue meter and every Wild symbol that appears also adds a clue to the meter. Once you have collected 8 clues then a Sticky Wild will appear and it will remain there for the duration of the Free Spins bonus game. Every Sticky Wild also counts towards the Clue meter. The Sticky Wilds can contribute to some big winning combinations so try to trigger it as much as possible.

Do not worry if you don’t spin 8 Wilds in one spin as this is where the Lock feature comes into play. It appears randomly at the start of a game and makes it really easy to trigger the Free Spins bonus game as it will lock the Wild symbols you have collected on the meter and let you spin again. It is worth noting that the Lock feature will only appear if the coin size is the same as it was on the previous spin.

The game is set in the 1920s and this evident as you soon as you load the game up as you can old style wallpaper draping the background and a plush purple carpet covering the base of the reels. The symbols are nicely illustrated and consist of characters of Agatha Christie’s novels such as Miss Marple, Mr Poirot, a typewriter and there is even a mousetrap symbol. This is a nice nod to Christie’s stage play “The Mousetrap” that holds the record for longest run in a theatre.

Each time you spin the reels, a piece of dramatic harp music plays out. This compliments the game really well and adds to the atmosphere as you try to solve the mystery of whodunnit!

Agatha Christie's Mystery Wilds is made by Gamesys and it is a fine tribute to a much-loved author. The game is wonderful to look at and to play and it ties in perfectly with the 1920s murder mystery theme. Collecting clues on the Clue Meter provides lots of entertainment and the Free Spins bonus game is great fun to play and it is the most lucrative part of the slot. If you are a fan of murder mysteries then this game should be right up your alley.