“We’re leaving together, but still it’s farewell” - if these lyrics ring a bell then this new slot from Big Time Gaming should be right up your alley! The Final Countdown is based on the smash-hit 1980s song by Swedish rock band Europe. Released in 1986, it was the first single from the band’s third studio album and incredibly reached number one in over 25 countries! To this day, the song is still played in the leadup to sporting events and is constantly covered by bands all across the world. To tie in with the theme of the song, Big Time Gaming decided to focus on a rocket launch into space as The Final Countdown begins. Join us in the cockpit as we leave ground and wonder will things ever be the same again as we spin the reels in this game?

The Final Countdown is a 6 reel slot with 4,096 ways to win that includes Free Spins, Cloning Reels, Expanding Wilds, and Roaming Wilds. 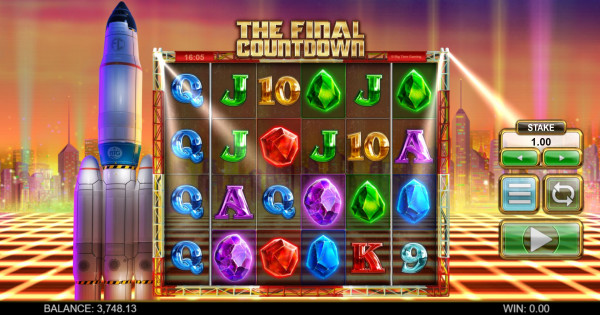 Top Casinos for The Final Countdown

The first thing you will notice when you load this slot for the first time is that it has an unusual layout of 6 reels along with a whopping 4,096 ways to win! To form a win in this game, all you need to do is land 3 or more matching symbols on adjacent reels starting from left to right. With so many ways to create wins on the reels, you’ll be blasting off into space with a huge cash prize in your pocket in no time at all!

Symbols in the game consist of a variety of different coloured gems along with classic A – 9 playing card icons. The most valuable symbol in the game is the purple gem as if you are lucky enough to land 6 of these symbols on an active payline then you will be awarded a superb cash payout worth 25X your wager!

Wild symbols in this game are represented by a male and female astronaut. They substitute for all other symbols apart from the Scatter to help create winning combinations and appear on reels 2 to 5 only.

During each spin there is a chance that between 2 to 4 matching reels link up to produce duplicate symbols between reels 2, 3, 4, and 5. This is known as the Reel Clone feature. If a Wild lands on a cloned reel then it will proceed to expand. The more reels that are cloned then the bigger the Wild becomes. This is referred to as the Clone Wilds feature with Wilds growing as big as 4x4 symbols on the reels. These Wilds also come with a lucrative multiplier which can reach a high of 256X which is awarded for having 4 Cloned Reels.

The Scatter symbol is illustrated by a gold frame with the letters ‘FC’ placed inside. Land 3 or more of these symbols on the same spin to trigger the Feature Selection bonus round. Once activated, you’ll be presented with a new screen where you get to pick one of the following 2 Free Spins bonus features:

More Bonuses for The Final Countdown

The visuals in The Final Countdown are top-notch as the game takes place in front of a bright neon-lit city with a huge rocket propped up beside the reels along with beaming patrol lights lighting up the screen. Symbols are nicely polished and consist of a bunch of sparkling Gems, classic A – 9 icons, along with Male and Female Astronauts. The animations are impressive as symbols speed down the reels and burst into life when part of a winning combination. For example, gems will sparkle and glow when part of a winning payline. It is particularly satisfying when you land a big win on the reels as you are treated to a cool animated sequence where gold coins fill up the screen.

The music is light techno with excerpts from the hit Europe song so if you are a fan of the band then you are going to enjoy playing this slot that little bit more.


Our Verdict on The Final Countdown

Leading software studio Big Time Gaming produced this slot and we are happy to say that it is a smashing tribute to a timeless 1980s song. This game features wonderful graphics, a catchy techno soundtrack, and just about the right amount of bonus features to keep you spinning those reels again and again. The Cloned Reels is a very lucrative feature with Cloned Wilds offering huge multiplier prizes as high as 256X when you manage to clone 4 reels. The most rewarding feature by far is the Free Spins feature which can take quite a good few spins to trigger. However, it is worth the wait as it is here where you can win the top prize in the game which is an extraordinary 36,000X your wager! Variance-wise, this slot is most definitely High so make sure to pack lots of bankroll before blasting off into space here! For slots with a similar Space theme, check out Ticket to the Stars and Cazino Cosmos.

Clone and expand your way to a space-filled fortune on the reels when you play The Final Countdown!