The Falcon Huntress from Thunderkick: Slot Review - the hunt is on!

Hunting with birds is a tradition that dates back hundreds of years and is still very popular throughout the Eurasian steppe. Hunters are known to use a range of birds such as eagles, falcons, goshawks, and many more to help catch foxes and rabbits during the cold winter months. Amazingly, there is even a Golden Eagle Festival that’s held in Mongolia where hunters compete to catch small animals and showcase their skills with their birds. This latest release from acclaimed software studio Thunderkick invites players to visit Mongolia to accompany a female falcon huntress as she tracks down her next prey.

The Falcon Huntress is a 9 payline slot that includes Expanding Wins, Wild Multipliers, and Free Spins. 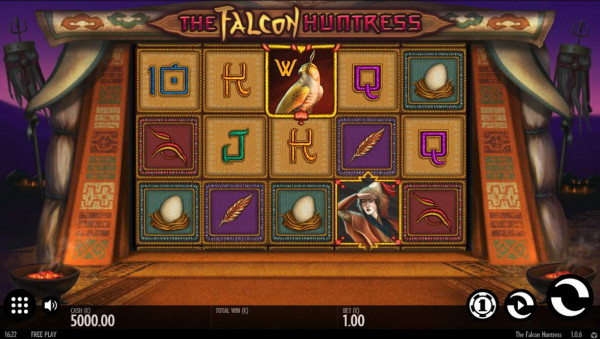 Top Casinos for The Falcon Huntress

The first feature to highlight is the obligatory Wild symbol and this symbol is represented by a beautiful golden falcon. Like traditional Wild symbols, it substitutes for all other symbols to help form winning combinations on the reels. It is a highly profitable symbol in this game as if you manage to land 5 of these symbols on an active payline then you will be awarded a fantastic payout worth 200X your initial stake! The Wild symbol also acts as the Scatter as it is used to trigger the Free Spins bonus game.

The standout attraction of the game is the Expanding Wins feature. This is a randomly triggered event which occurs when you land a winning combination on the reels. Once activated, all winning symbols will expand to cover an entire reel to really boost your chances of a landing a huge payout. It is worth mentioning that the Wild symbol is the only symbol that does not expand. This highly rewarding feature is also active in the Free Spins bonus game.

More Bonuses for The Falcon Huntress

The graphics are a real visual feast for the eyes as the game is set inside a beautifully decorated tent somewhere in Mongolia. You will notice huts in the background and smoke billowing from two pots in front of the tent which are presumably acting as lights. Symbols are wonderfully designed and consist of the Falcon, the Huntress, an Egg, an Ayak Baus, a Feather, and the usual A -10 icons. The animations are impressive as symbols highlight with a nice gold frame when part of a winning combination and if you look closely at the Huntress symbol you will see her hair and clothes sway back and forth. It's a nice visual touch.

The music is mysterious, suspenseful, and full of soft wind chime effects. It suits the gameplay really well.


Our Verdict on The Falcon Huntress

The Falcon Huntress is made by Thunderkick and is a highly enjoyable slot to play. The theme of the game is highly original and something that’s never been done before so hats off to Thunderkick there. The game is very easy to play, features gorgeous graphics, and a nice range of bonus features to keep the excitement levels up as you spin the reels. The highlight of this game is without a doubt the Expanding Wins feature and it’s just fantastic that it triggers quite often and that it's also active in Free Spins. If you manage to have a 5 of a kind win when Expanding Wilds triggers then you will earn yourself a very handsome reward! I found this game to be of High variance so be warned that it will take you some time and some bankroll before you land yourself a big enough payout on the reels. For slots with a similar bird theme, check out Birds! and Bird of Thunder.

Hunt your way to a huge fortune when you play The Falcon Huntress!