Phoenix Fire from Playson: Slot Review - immortality on the reels!

For a fresh and fiery twist on classic fruit machine slots then check out this game!
casino game review phoenix fire playson slots

Fruit machine online slots are a staple of the online casino community as software developers continually release new games revolving around this classic genre on a yearly basis. This latest release from top software producer Playson is of course inspired by fruit machine slots but features a novel concept as it merges this theme with the mythical bird known as the Phoenix. This fiery creature was set to rise from the ashes even stronger when defeated in battle. Let’s see if this bird can lend us its strength to help us set some reels on fire and win a big cash payout in the process! 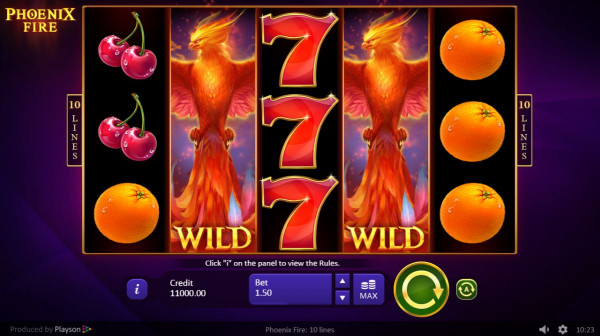 The first feature to mention is that this game pays out both ways which mean that winning combinations can be formed from left to right as well as from right to left. This is a nice little feature as it gives you plenty of potential to win lots of cash payouts as they spin the reels.

Phoenix Fire features an assortment of Fruit Machine symbols such as Plums, Cherries, Lemons, and Oranges. These are the lowest paying symbols and pay out up to 3X your stake if you land 5 of them on an active payline. The highest paying symbol in the game is the Red Lucky 7 as if you happen to land 5 of these symbols on a winning payline then you will bag yourself a fine payout worth 25X your stake!

The Wild symbol is represented by an image of the Phoenix. Typical to most Wild symbols, this symbol replaces all other symbols to help create winning combinations on the reels. This symbol only appears on reels 2, 3, and 4 and when it lands then it will proceed to expand to turn a whole reel fully Wild. It will then lock into place and grant you a free respin. If you land another Wild symbol during a respin then it too will remain into place and award another respin. It is possible to get up to 3 respins in total with this bonus feature.

To be fair, the graphics are fairly standard as the game is played in front of a dark purple background featuring a simple pattern. I was expecting more illustrations of the Phoenix here to be perfectly honest. Symbols are bright and colourful and consist of a range of classic Fruit Machine icons such as Lucky 7s, Liberty Bells, Cherries, Lemons, Plums, Grapes, Watermelons, and Oranges. The animations are decent as symbols fly up and down the reels and enlarge when part of a winning combination. It’s visually very impressive when the Phoenix appears on the reels and majestically expands to cover an entire reel.

There is no soundtrack in this game apart from a few generic fruit-machine style sound effects. It ties in well with the classic theme of the slot.


Our Verdict on Phoenix Fire

Phoenix Fire is created by Playson and is a simple and fun online slot to play. The concept of the game is excellent but it would have been nice to see more illustrations of the Phoenix in the background behind the reels to help liven things up that bit more. In terms of bonus features, there are not that many but I was able to land a few Respins thanks to the Expanding Wild symbol. It’s a shame this game does not feature any Free Spins or any other extras as they would help expand on the simple gameplay to make it that bit more exciting to play. Variance-wise, I found this slot to be ranging between Medium and High so you better make sure to have a decent bankroll before you start playing this game! For slots with a similar phoenix theme, check out Secrets of the Phoenix and Fenghuang.

Rise from the ashes to land a flaming hot fortune when you play Phoenix Fire!