Fenghuang from Habanero: Slot Review - a taste of Asian mythology

This game has a distinctly Asian flavour and it revolves around the ancient Fenghuang birds. These creatures were mythological phoenix-like birds that ruled the roost over every other single bird. According to Chinese mythology, this bird would combine with a dragon to become an unstoppable force of nature! The bird and dragon have a kind of yin and yang relationship and this is evident in the game’s logo.

These birds were also known to bring good luck and it is a symbol of high virtue and grace throughout China.
History lesson over and done with now, onto the game!

It has 5 reels, 28 paylines and comes with some interesting features such as free games and expanding wilds. 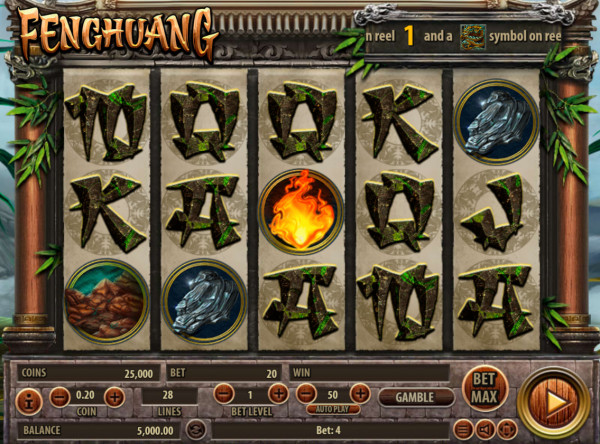 The standout feature of this slot is the Free Games mode. This is triggered when a Phoenix Wild symbol appears on reel 1 and a Dragon Wild symbol appears on reel 5. Free Games will keep going until the Phoenix and Dragon symbol no longer appears on the screen. The neat thing about this mode is that the Dragon and Phoenix symbols will walk around the screen on each free spin and if they come together then they form the combined Fenghuang Wild symbol. This powerful symbol will cover a 2x3 section of the grid and it will greatly increase your chances of a big payout.

The game is a joy to look at and being a fan of Asian culture, I was very impressed with the game’s presentation. The slot machine itself is covered in bamboo shoots and there is a lush green background in the distance.

The symbols are beautifully detailed and I really liked how the 10, K, A, and Q symbols each display a kind of Asian type font.

The music is great and as you would expect, it is distinctly Asian-based. It really suits the game’s theme down to a tee.


Our Verdict on Fenghuang

Fenghuang is made by Habanero and it’s a fascinating look into ancient Chinese culture and I must admit that I learned quite a bit from playing this slot. The presentation is amazing and really polished. The only gripe that I would have, is that the dragon and phoenix wild symbols look a bit too similar but apart from that, it is a really enjoyable slot to play.

Seek out the Fenghuang and you'll be greatly rewarded!