Enter a futuristic world where a cyborg battles it out with a horde of angry beasts known as Kaiju.
casino game review elk studios kaiju slots

This latest release from leading software studio ELK Studios transports players to a futuristic world that is slowly being destroyed. In this game, humans now live on a manmade island in the middle of the Pacific Ocean and it is the last known human settlement on the planet. The humans are in constant battle with a group of angry beasts known as the Kaiju. These creatures are cursed to grow crystals and gems on their skin which hurt the Kaiju and make them very aggressive who in turn take their frustration out on the humans. There is hope for the humans in the form of a female cyborg called HA-42. She is powered by a compact nuclear reactor which makes her the ultimate weapon of humanity. It is up to you to join HA-42 now as she hunts down the Kaiju to take away their harmful gems and crystals in order to turn them back into peaceful creatures.

Kaiju is a 5 reel slot game with up to 7,776 ways to win and includes Sticky Wilds, Free Spins, and a Vertical Laser feature. 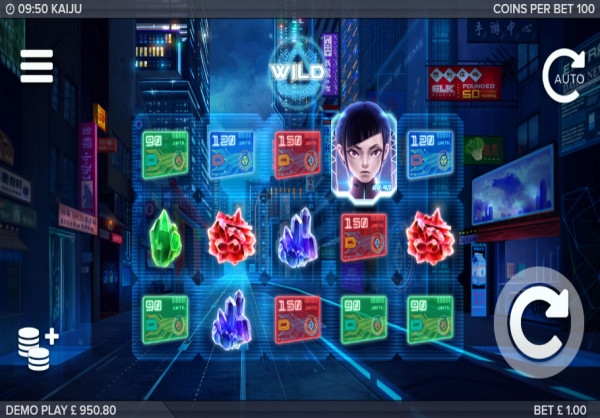 The first thing to highlight is that the game features up to 7,776 ways to win which should provide players with plenty of opportunities to score some huge wins on the reels. Winning combinations are formed by landing 3 or more identical symbols starting from the left to right on the reels and the reels can expand upwards for up to 3 rows which makes it possible to win in up to an incredible 7,776 different ways.

The Wild symbol is represented by the word ‘Wild’ inside of a transparent glass tile with a blue triangle shape. This symbol is very important in the game as it is used to trigger the Vertical Laser feature. When you land 3 matching symbols connected along a vertical line then the Vertical Laser feature will kick in and add another Wild on the reel above. This Wild stays in place for that spin to further boost your chances of landing a nice payout on the reels.

The Scatter symbol is denoted by an image of HA-42 and when you land 3 of these symbols on reels 2, 3, and 4 then you will trigger the Kaiju Battle bonus game. In this feature, you are awarded 7 Free Spins and a random Kaiju beast with an individual pattern of hot spots is selected as an opponent. To defeat the Kaiju, you need to land Vertical Lasers on the highlighted hot spots which in turn expand the reels upwards. The reels cannot expand above a hot spot. The expanded reels remain in place for the duration of the bonus game with each expansion rewarding you an additional Free Spin. It’s possible to get up to 5 extra Free Spins which brings the potential Free Spins total to 12. A Kaiju is defeated when all of its hot spots have been activated by the Vertical Laser and if you manage to beat a Kaiju then you will be awarded with a reel full of Sticky Wilds symbols which remains in place until the feature ends.

The graphics are top-notch as the game is set in a futuristic manmade city full of stylish neon lights and tall skyscrapers. The Kaiju are superbly designed and each beast is covered in different coloured crystals and quite menacing to look at! Symbols are nicely detailed and consist of a variety of gems, crystals, and special cards. The animations are spectacular as the Vertical Laser lights up symbols when they form a winning combination on the reels and I really enjoyed how you battle the Kaiju on an entirely new set of reels in the bonus game.

The music is light techno with lots of electronic sound effects. It ties in really well with the sci-fi theme of the slot.


Our Verdict on Kaiju

This slot is made by ELK Studios and it’s a whole lot of fun to play. The game is superbly designed and features amazing graphics, an easy to use layout, and a fine array of bonus features. The fact that you can expand the reels to provide up to 7,776 ways to win is phenomenal and that you can win up to 1,305X on each spin makes it highly lucrative to play as well. The standout feature of the game is the Kaiju Bonus Game as not only do you get great satisfaction from defeating one of the Kaiju but you also get a whole heap of Sticky Wilds for your troubles to really increase your chances of landing a huge payout! The only downside of the bonus game is that it can take quite a few spins to trigger it. I found this slot to be Highly volatile so make sure to keep a close eye on your bankroll when you spin the reels in this game. For slots with a similar sci-fi theme, check out Reptoids and Iron Girl.

Join HA-42 in the battle to save mankind to win a fortune on the reels when you play Kaiju!