Ice Cave from Playtech: Slot Review - a game with an icy bite!

Norse mythology is a popular theme that has been explored by many software developers down through the years. This time around, acclaimed software producer Playtech decided to have a crack at it with their latest release - Ice Cave. The game surprisingly focuses on lesser-known gods and people as it revolves around Jarl who was the first of the race of warriors born from the Norse God Ríg and Valkyrie who was an ancient Asgardian warrior who would choose who lives and die in battle. The game also features the monstrous wolf known as Fenrir who also recently made an appearance in the hugely successful Thor Ragnarok movie.

Ice Cave is a 5 reel slot game with 20 paylines and includes Ice Wilds, Hammer Wilds, and a Feature Bet option. 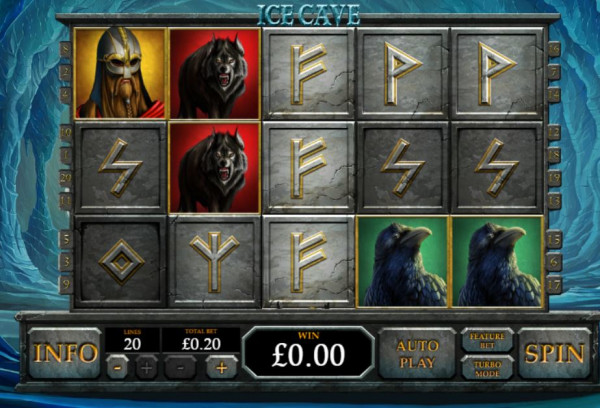 The first feature I came across while playing this game is the Ice Wild symbol. This symbol is illustrated by the word “Wild” in ice-cold blue letters. This symbol substitutes for all other symbols on the reels but when this symbol is part of a winning combination then your winnings are nicely boosted with a 3X multiplier! That is not all as when this symbol appears on reels 3 and 4 then it will become sticky and remain locked in place until the Hammer Wild removes it.

The final feature to mention is the Feature Bet. This is an optional bet which can be activated by pressing the ‘Feature Bet’ button located just below the reels. When this is enabled, it will increase your total bet by 1.5X but also adds additional Ice Wilds to reel 5 to further increase your chances of landing a big win.

To be honest, the graphics are a tad dated especially when you compare it to more recent Norse Mythology based games like the excellent Play’n GO slot Viking Runecraft (read our review here). The game is set deep inside a large cave that features massive stalagmites and stalactites. Symbols are lit with colourful backgrounds and feature Jarl, Valkyrie, Fenrir, a Raven, a Longship, and a few different Norse symbols. Whenever you land a winning combination, the symbols are covered in a sparkling light blue glow. It's a nice visual touch.

The music is haunting and features a crystal echo-like sound. It ties in nicely with the Norse theme of the game.


Our Verdict on Ice Cave

Playtech created this slot and although it is not the slickest looking Nordic-themed game out there right now, it is super easy to play and it does have a certain charm about it. Admittedly, the game does not contain that many bonus features such as Free Spins or Respins but the 2 Wild symbols more than make up for it as if you manage to land a few Ice Wilds on consecutive spins then you will earn yourself a massive payout as a result of them locking into place on the reels. I found this game to be of Medium to High variance so make sure to have lots of patience and a decent enough bankroll before playing this slot!

An Ice Cave full of treasure and good fortune awaits!