Journey to the far reaches of outer space in this popular online slot from leading software producer Skillzzgaming! This game takes place in a swirling galaxy full of nebula stones that are hidden deep inside a vast array of sparkling starlit gems. So strap on a spacesuit and join us as we blast off into space in search of these rare gems in the hopes of landing a huge cash prize in this fun space-themed game.

Gems Odyssey is played on a 5x5 grid and comes with Cascading Reels, a Level Up feature, a Second Chance round, and a Fixed Jackpot. 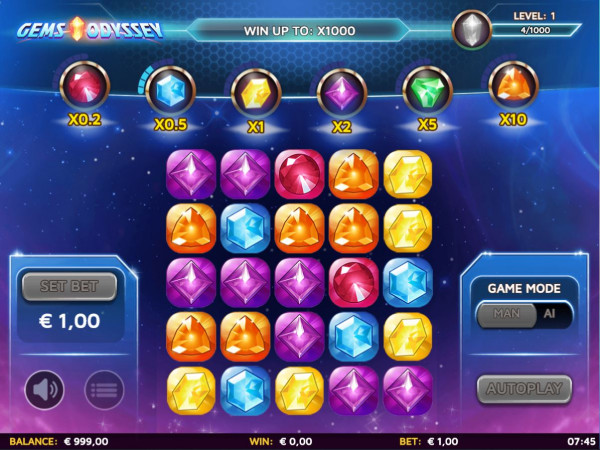 Gems Odyssey does away with the traditional payline structure as it instead is played on a 5x5 grid that incorporates a cluster pay system. This means in order to create a winning combination, you will need to land a cluster of 3 or more identical symbols. As soon as 3 or matching symbols appear on a cluster, you then have the opportunity to click on this cluster and they will proceed to disappear to be replaced by new symbols from above. This can be extremely rewarding as it allows you to land winning combinations one after the other and continues until no more winning clusters can be viewed on the grid.

Symbols in the game include a variety of gems ranging from rubies, sapphires, garnets, and emeralds. As you create winning clusters of three or more identical tiles then you will fill up a gem’s corresponding bar which is displayed at the top of the reels. Gem bars can be filled multiple times per game and require at least 7 identical gems to fill up completely. Rubies are the lowest paying symbol as they offer a multiplier value of 0.2X your bet whereas the Orange Garnet is the highest paying symbol as it offers a fine cash payout worth a nice 10X your stake.

Gems Odyssey comes with 4 different types of Nebula Stones. By blasting Nebula Stone clusters you will reveal a Nebula Stone and this stone is then stored in your inventory until you level up to the next level. The Nebula Stones offer the following rewards:

As you blast your way through gems and Nebula Stones, you will receive bonus points. For example, each tile that you blast is worth one point. These points are then used to level up and when you level up you can then exchange Nebula stones to receive the rewards mentioned above. There is no limit as to how many levels you can advance to while playing and as you might imagine the rewards increase in value as you progress through the game.

The final feature to discuss is the Jackpot feature. This involves blasting a cluster of at least 3 Jackpot tiles to win the top prize in the game which is worth an incredible 1,000X your wager!

The game features crisp and slick graphics as it takes place in front of a swirling galaxy full to the brim of twinkling stars and gaseous clouds. Symbols in the game consist of a variety of sparkling gems such as Rubies, Garnets, Emeralds, and Sapphires. The animations are worth highlighting as symbols shine brightly when you click on a winning cluster and transform into a star that then fills up a gem’s corresponding meter. It is particularly pleasing when you land a big win as the screen darkens and is filled with streaks of bright neon green rays. It's a really nice visual touch.

The music is atmospheric with a light techno soundtrack used throughout. It ties in quite well with the Space theme of the game.


Our Verdict on Gems Odyssey

Gems Odyssey is made by stellar software provider Skillzzgaming and is a rip-roaring space adventure not to be missed! Similar to other Skillzzgaming slots such as Pets Go Wild and Fruit Blast, this highly entertaining game involves skill in addition to random luck. It is actually possible to let the game play out itself by clicking on the AI button but there is no real fun to be had there as ultimately you want the final say on which tiles to blast on the grid. You won’t find any Free Spins or Bonus Games here either which is not really a concern as it’s all about collecting Nebula Stones and levelling up in order to win bigger cash prizes. The top prize for this game is a fantastic 1,000X your bet which can be won in the Jackpot feature. Variance-wise, it is Medium so it won’t take you too long to blast your way to a decent enough cash payout. For slots with a similar Space theme, check out Starburst and Opal Fruits.

Blast tiles to win a gem-filled fortune on the reels when you play Gems Odyssey!