Starburst from NetEnt: Slot Review - one of the most popular slot games on the planet

Starburst is one of NetEnt's most popular slot games. This review has considered its bonus feature, the wild symbol, its design, its tune and also its overall look and feel.
casino game review netent slots starburst

Upon starting Starburst, a slot game developed by NetEnt, players are greeted by sounds reminiscent of the 'good old' GameBoy. The game loads instantly, spins seamlessly and only on a few occasions does it lag, which can be easily improved by adjusting the game’s graphic quality. 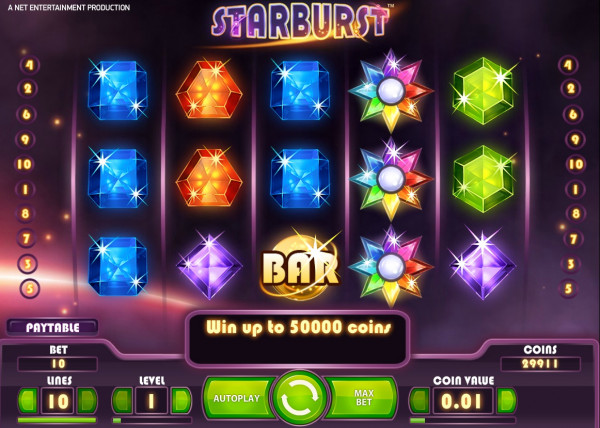 Starburst has one bonus feature, the Starburst Wild symbol. This differentiates the slot game from NetEnt's usual bonus-heavy games, such as Dracula or Aliens. The Wild symbol may appear on reel two, three or four, expanding over the entire reel, substituting all symbols, and triggering a re-spin. Naturally, gamers can't have it all. The maximum re-spin is capped at three. On the upside, though, there is no extra cost attached to this bonus feature, which increases the potential for winnings immensely. Bets start at 0.01 per spin and go as high as 100 a spin. Furthermore, the winning lines run both ways – from left to right, and vice versa – thereby, doubling the chances of a winning combination.

This fairly simple bonus feature certainly beats Starburst's repetitive tune. The funky retro tune may delight some but doesn't do it for me. Thank god for the mute button!

Unlike other recent NetEnt games, Starburst steers clear of a movie theme and resembles slot machines in brick-and-mortar casinos. However, it retains snazzy features typical of online and mobile gambling; such as great graphics and easy usability, both in its desktop and mobile versions.

Starburst requires several spins to hook those less seasoned online players, who enjoy traditional fruit machines. With ten paylines, this game shines with simplicity. This is repeatedly cited as the number one feature which attracts players to Starburst. In fact, the game has an autoplay option which removes almost all player-game interaction and allows players to set a number of rounds played automatically. Players get the best buzz out of Starburst, by sitting back and letting NetEnt's software do it all. The winnings may not be gigantic, instead relatively small and repeated.

Our Verdict on Starburst

Starburst may not quite be a bursting star, but tries hard to be. The slot game is a little unsophisticated, but that is the beauty of the game. This is a little harsh. I admit it is also subject to personal opinion; after all, the game is among the most popular slot games developed by NetEnt.