Doublin' Gold from Booming Games: Slot Review - top of the morning to you!

Take a trip to the Emerald Isle to look for a huge pot of gold that's hidden beneath the end of a rainbow.
booming games casino game review doublin gold slots

Ireland is a source of great inspiration for countless software developers as it is a country filled with beautiful scenery, culture, and of course leprechauns! This new release from leading games developer Booming Games invites players to travel to a mystery location in Ireland where a mischevious leprechaun is guarding a huge pot of gold. To pinpoint the exact location of where the leprechaun and the pot of gold might be, you must race to the very end of a rainbow before it disappears from view. So put your best running shoes on and start chasing the rainbow if you want to find the treasure in this game!

Doublin' Gold is a 3 reel slot with 10 paylines and includes Wild Multipliers and a Mix ‘n’ Match feature. 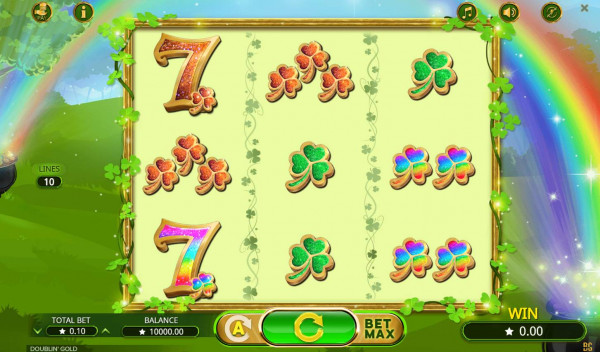 The first feature to highlight is the Wild symbol and this is represented by an image of a leprechaun standing beside his pot of gold. The main function of this symbol is to substitute for all other symbols in matches formed of identical symbols and when this symbol is part of a winning combination then it will double your winnings. That’s not all as if you land a winning combo containing 2 Wilds then your win will be quadrupled! Be sure to keep a very close eye on this symbol as it is also the highest paying symbol in the game. If you happen to land 3 of these symbols on an active payline then you will be doing a wild Irish dance with a fantastic payout worth 500 coins!

The standout attraction of this game is by far the Mix ‘n’ Match feature. This feature is highly innovative and involves symbols that aren’t completely identical still forming winning combinations on the reels! Amazing, right? To expand on this, in Doublin' Gold you have 2 symbols in the form of 7s and shamrocks. These symbols can appear in 3 different colours on the reels. Thanks to the Mix ‘n’ match feature, you can form winning combinations with both symbols of the same form or by the same colour. For example, you can create a win by landing the Green Shamrock/Rainbow Shamrock/Golden Shamrock symbols on the reels or by landing any symbol that is of green colour.

The game is set in the beautiful country of Ireland and features a very colourful design that’s filled with gold coins, rainbows, trees, a bright blue sky, and a cheery Irish leprechaun. The reels are placed inside a beautiful gold frame with lines of shamrocks of all shapes and sizes used to separate each reel. Symbols are big and nicely detailed and consist of different coloured shamrocks and lucky sevens. The animations are smooth as symbols run up and down the reels and are highlighted with a bright golden shadow when part of a winning combination. It's a nice visual touch.

The music is traditional Irish music as you would expect and I must admit I found myself toe-tapping to the tune quite a bit while playing this game!


Our Verdict on Doublin' Gold

Booming Games produced this slot and it is a very enjoyable trip to the Emerald Isle. It is super easy to play, is easy on the eye, and contains a decent amount of bonus features to keep the action ticking over nicely. It's great that you can form winning combinations from so many different variations thanks to the highly innovative Mix ‘n’ Match feature and it’s even better that you have the potential to quadruple your winnings when you are lucky enough to land 2 Wilds in a winning combo! A minor drawback of this slot is that unfortunately it does not feature a Free Spins mode. I found this game to be of Low variance so it won’t take you too long until you nab your own very pot of gold! For slots with a similar Leprechaun theme, check out Finn and the Swirly Spin and Charms & Clovers.

Strike it lucky and land a pot full of gold when you play Doublin Gold!