Coins of Egypt from NetEnt: Slot Review - unearth a fortune!

Embark on a dangerous quest to seek out the temple of the gods in this action-packed online slot.
casino game review coins of egypt netent slots

Get ready for a perilous and exciting trip to the sandy dunes of Egypt in this new game from top software studio NetEnt. The Ancient Egypt theme has been explored countless times before but this slot aims to stand out from the rest as it takes place at the entrance of a beautiful hidden temple where the curse of Anubis guards a deadly secret. Join us as we venture deep inside this temple in search of piles of golden treasure and hope that the curse does not stop us from landing a couple of earth-shattering wins along the way!

Coins of Egypt is a 5 reel slot with 20 paylines that comes with Wild Symbols, Free Spins, and a Pharaoh Coins Win feature. 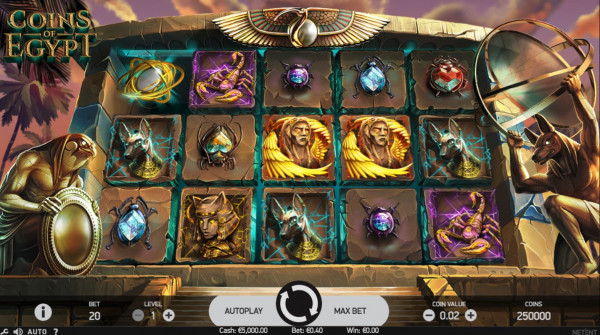 Top Casinos for Coins of Egypt

The first feature to highlight in this game is the obligatory Wild symbol. This symbol is represented by a beautiful golden scarab. Like most Wild symbols, its main job is to replace all other symbols except the Scatter, Chest, and Collect symbols, to help form winning combinations on the reels. Keep a very close eye on this symbol as it is the highest paying symbol in the game. Land 5 Wilds on an active payline to win a top prize worth 3,000 coins!

As you play the game, you will notice symbols with coin values appear on reels 1, 2, and 3. These coins award multiplier prizes which range in value from 2X all the way up to 15X. All coins are collected and added to any winnings that you have already created on the reels when a collect symbol (head of Tutankhamun) appears on reel 5. This is known as the Pharaoh Coin Win feature.

A disk inside of a bunch of rotating rings is the Scatter symbol and if you land 3 of these symbols simultaneously on reels 1, 3, and 5 then you will trigger the Free Spins bonus game. Once activated, 3 treasure chests featuring a Ruby Eagle, an Emerald Snake, and a Golden Cat will appear below the reels and any coins that appear on the reels will be added to these chests. Up to 3 Coins, one per reel, may appear on reels 1, 2, and 3 during Free Spins. Chest Seal symbols will also appear on reel 5 which correspond to each chest. One Chest Seal symbol can be collected on each Free Spin and once you have gathered 3 matching Chest Seal symbols to completely fill up one of the chests then the feature will end. You will then be awarded a payout which includes the coins collected in the chest. Unfortunately, additional Free Spins cannot be won during this feature.

More Bonuses for Coins of Egypt

With this being a NetEnt game, you just know they are going to knock it out of the park when it comes to exquisite graphics and out-of-this-world animations. The game takes place in front of a beautifully designed old temple that is guarded by statues of two mighty Egyptian Gods with Horus on the left and Anubis on the right of the reels. Look closely and you will also notice swaying trees in the distance and a sky filled with fast moving clouds. It all adds nicely to the epic nature and mystical feel of the game. Symbols are wonderfully rendered onscreen and consist of Isis, Anubis, Bastet, Wadjet, a Scorpion, as well as a bunch of different coloured scarab beetles. The animations are excellent as symbols burst into life when part of a win on the reels. For example, the Golden Scarab Wild symbol will flutter its wings when part of a winning combination.

The music has a real mystical vibe to it which ties in really well with the Ancient Egypt theme of the game.

The game features 20 paylines, an extraordinary RTP of 96.97%, and a low maximum payout worth 274X your wager.


Our Verdict on Coins of Egypt

This game is produced by software giants NetEnt and is frankly one of the best looking Ancient Egypt themed slots we have come across in quite some time. Coins of Egypt features stunning graphics, fast-paced gameplay, an atmospheric soundtrack, and more than enough bonus features to guarantee you keep spinning those reels for as long as possible. The main attraction of the game is the Free Spins feature which thankfully does not take too long to trigger and offers decent cash prizes especially if you unlock the Golden Cat chest. The only downside to this rewarding feature is that you cannot retrigger it. When it comes to variance, I found this slot to be middling between Low and Medium which means you won’t have to wait too long before seeing a profitable return on the reels. For slots with a similar Ancient Egypt theme, check out Tut's Twister and Valley of the Gods.

Uncover a hidden fortune beneath the sands of an old temple when you play of Coins of Egypt!