Book of Immortals from iSoftBet: Slot Review - a rewarding trip to Ancient Egypt!

Seek out a mysterious blue book to unlock the powers of four ancient Egyptian Gods in this fascinating slot from iSoftBet!
book of immortals casino game review isoftbet slots

Experience the wonders of Ancient Egypt in this latest release from top software provider iSoftBet! This slot is all about looking for a mystical blue book that’s guarded by some of the iconic and powerful Egyptian Gods including Anubis, Ra, Bastet, and Khnum. According to legend, those who find the book will not only unlock the great powers of the gods themselves but will also get their hands on a treasure trove of ancient riches. Join us as we traverse the sandy dunes of Ancient Egypt in search of the book to see what kind of ancient treasure the gods might bestow upon us in this game?

Book of Immortals is a 5 reel slot with 10 paylines that comes with Expanding Symbols, Free Spins, and a Scarab Swap feature. 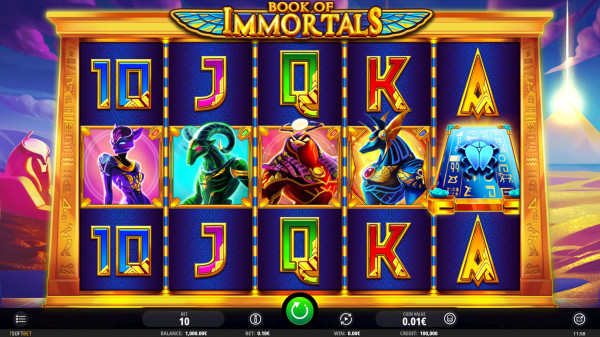 Top Casinos for Book of Immortals

The game features a selection of Ancient Egyptian iconography including hieroglyphic-style A – 10 playing card symbols along with 4 different Egyptian Gods. Theses include symbols based on Ra, Anubis, Bastet, and Khnum and can appear stacked on the reels. The most valuable symbol in the game is Anubis the jackal as when you land 5 of them on a payline then you will be treated to a fine cash payout worth 15X your wager.

An image of a blue book with a scarab on the front is the Wild symbol which also acts as the Scatter symbol in the game. It replaces all other symbols to help create winning combinations on the reels. Land 3 or more Wilds anywhere on the reels to trigger the Free Spins bonus game along with receiving a Multiplier prize. The more Wilds you land then the bigger the Multiplier prize becomes:

During Free Spins, one symbol is chosen at random. This symbol will then proceed to expand and fill an entire reel whenever it lands during the bonus game and also pays out Scatter-style on non-adjacent reels. The God symbols also come into play during Free Spins as when they appear they will expand to fill whole reels and remain in place for the entire feature. A pleasing aspect of Free Spins is that you can land additional Free Spins by getting the Extra Free Spins symbol on the top reel during the feature.

The final feature to discuss is the Scarab Swap feature. This a random bonus event that can occur on any paid spin. When it triggers then a swarm of Scarabs will fly across the reels and land on up to 10 symbols. The Scarabs will then upgrade these symbols to give you a potentially even bigger win on the reels.

More Bonuses for Book of Immortals

Graphically speaking, Book of Immortals features bold and striking graphics. It takes place in the sandy dunes of Ancient Egypt with a dusky blueish purplish sky overhead along with a tall pyramid illuminating a bright white light in the background. Symbols feature a rather futuristic design which is refreshing to see for an Ancient Egyptian themed slot and consist of Ra, Anubis, Bastet, Khnum, along with classic A – 10 playing card icons. The animations are a real visual treat as symbols burst into life when part of a win on the reels as they proceed to enlarge and move about onscreen. A special mention for the Scarab Swap feature as when triggered, Scarabs will rapidly swarm the reels to upgrade symbols. It’s a really neat animation sequence.

The music is atmospheric with lots of stringed and percussion instruments playing in the background. It fits in nicely with the fast-paced gameplay.


Our Verdict on Book of Immortals

This game is produced by renowned software studio iSoftBet and is yet another jaunt to Ancient Egypt but one that’s far more memorable than most. It features slick graphics, a superb matching soundtrack, along with a host of impressive bonus features. The Scarab Swap feature is quite lucrative as it can upgrade up to 10 symbols at a time although it did not trigger too much while playing. The standout attraction is Free Spins as you can benefit from Extra Free Spins, Multipliers, along with Expanding Symbols that can expand and remain in place for the entire feature if you are lucky enough to get a God symbol here. The top prize for this game is a decent 638X your total bet which can be won on any spin. Variance-wise, it is Low to Medium so expect to win quite regularly but note that some payouts do tend to err on the small side. For slots that also take place in Ancient Egypt, check out Coins of Egypt and Mighty Sphinx.

Let the Golden Scarab lead you to lots of cash prizes on the reels when you play Book of Immortals!