Have a guess what the slot game Arcader by Thunderkick reminds me of? Of course, the slot game reminds of the early decades of arcade gaming, it reminds of the 80ies and of Space Invaders. In tune with the theme, the Thunderkick game stars pixelated symbols on its five reels and three rows. In style with classic game design, the 15 paylines in this retro game work in a fairly basic fashion, from left to right. 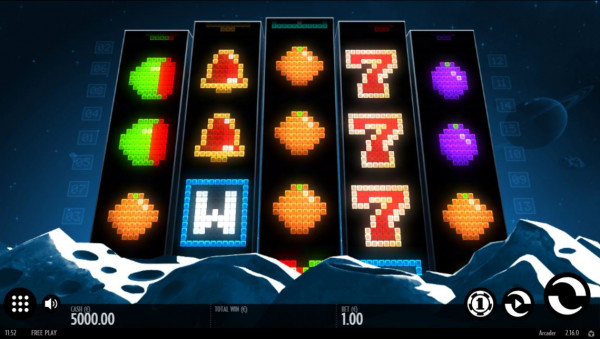 You are mistaken if you believe that Arcader remains basic, though. This Thunderkick slot game comes with an array of great bonus features. First, there is the so-called expander, which is a wild symbol, expanding and substituting symbols on the reel, so that wins are formed. In Arcader the wild is clever and only replaces the symbol which will give a player the highest win. Pretty cool, but it even gets better with the free spins feature.

Fairly typical, three symbols (in Arcader’s case a big green ‘B’) need to appear anywhere on the reel for this feature to trigger. Three get players 9 free spins coupled with a 1-time multiplier. While the number of free spins remains the same regardless of the amount of Bs received, the multiplier amount goes up and can reach a maximum of nine.

To add some interactivity to the slot game, Arcader also comes with a pick game. This time, it's three big Ms that a player wants to receive. The game allows players to pick from several pixelated symbols, and awards a cash prize with every pick, unless a player hits the red X. The chances of hitting the game-ending X in your first round are unlikely, making this a solid pick game - possibly, even my favourite game feature.

The background is dark and starry, and the foreground depicts some alien planet, which one we do not know. The design of this game, though simple, scores highly in my books. In short, it’s fun and retro, with the symbols depicting 64-bit versions of classic casino symbols, such as lemons, watermelons and bells.

Arcader is not overloaded with bonus features. While some gamers may think this has a negative impact on the game’s odds, this certainly isn’t true for Arcader. The Thunderkick slot game provides players with both continuous wins and wins that are of a high enough amount. Of course, Arcader does not match some of the modern jackpot slots in terms of potential winnings, but it is such a pleasant game to play, it need not. The fun when playing Arcader makes up for this. Given that game includes a great pick game, it offers a great balance between fun and wins. For that reason, I would recommend playing, so long you are having fun. Along the way, you are bound to hear some fun, and naturally, retro sounds to indicate that you’ve hit a good win.

Our Verdict on Arcader

Aracader combines all that lovers of retro slots, especially arcade-type games, enjoy. While it may seem that this game is only for those types, this isn't necessarily true. The slot game draws on the latest technology to provide a super smooth gaming experience. After all, Thunderkick isn't stuck in the 1980s but has simply recreated the design, while it embraces technology worthy of 2016.