Like so many, I got sucked into playing slot game 24 by virtue of having seen the TV show of the same name. Kiefer Sutherland, pointing a gun towards you, got me to give this slot game a go. 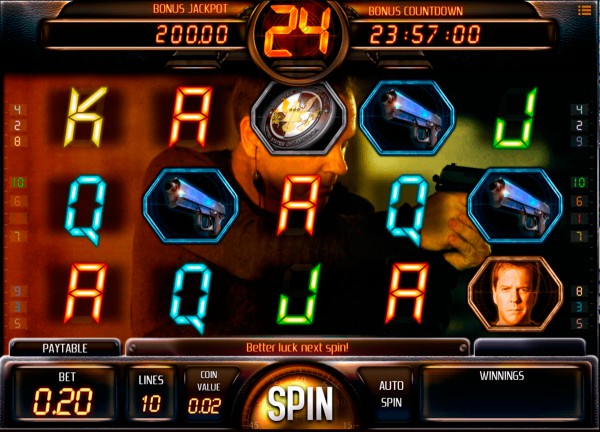 This 24-hour clock is my favourite. It counts down each time you take a spin, from 23:59, until it reaches 00:00. Players that have been patient enough with this video slot game, are redirected to a screen, where they are asked to shoot terrorists. Once shot, the terrorists turn a certain colour. If the same colour is matched three times, players receive a bonus prize. This little bonus game at the end of the round is expertly developed. Players look right through a gun scope with the criminal marked infra-red.

This brings me to my least favourite feature of 24, while the bonus game is easy on the eye, sometimes, when the reel is spinning, the colour seems almost too bright. A bright yellow 24-symbol seems to be everywhere you look, but then, this slot game clearly falls into the action-genre....and missions aren't always easy.

The symbols relate to the TV Show 24. The logo of Jack Bauer’s (that’s who Kiefer Sutherland plays in 24) Counter Terrorism Unit, a handgun and Jack-through-to-Ace are all symbols on the reel. Furthermore, a 24-hour clock ticks away in the background.

Aside from the bonus game, there is also a 24-symbol, which may appear on the reel. This slot symbol represents the Wild Symbol. It substitutes any symbol missing from a winning combination; additionally, the 24-symbol also acts as a Sticky Wild if it appears on reels 2, 3 or 4 while triggering a re-spin. With that in mind, it's always great to receive a 24-symbol and to amend your bet level and coin value dependent on how much you have made. I recommend an approach, whereby players set aside some of their winnings each time, just to have some winnings stacked away and not risk too much.

The game is certainly more fun if you are familiar with the TV Show; otherwise, it may just seem like 24 overkill. Having said that, the bonus game makes up for a lot, as do iSoft Bet's fantastic graphics.