On his Way Up

What would you give to be in Madison Square Garden this Saturday night? UFC 205 boasts possibly the best ever fight card in the history of the sport. A fitting way for the close-combat sports event to finally announce itself to the city that never sleeps after all these years.

The main event sees Eddie Alvarez defend his lightweight belt against Conor McGregor in what should be one of the fights of the year.

Since “The Notorious”’ began his rise to fame in late 2014 he has divided fans everywhere, establishing himself as the marmite of the sporting world over the last two years. That debut at UFC 178 (a first round TKO of Dustin Poirier) was the Irishman’s announcement to us all that he had arrived. He quickly grew his Irish fanbase, ensuring many an alarm clock on the Emerald Isle was set for 4:30am(ish) for all of his Vegas bouts. That is, of course, if you were not one of the travelling thousands who made their way over the Nevada Desert to join McGregor in battle.

In the US West Coast city, we’ve seen true stars of the octagon fall at Conor’s feet. At UFC 189 he claimed the Interim UFC Featherweight belt, beating Chad “Money” Mendes in the 2nd Round after Mendes agreed to replace the injured Jose Aldo on the card at short notice.
UFC 194 was the stunning 13-second k/o of Jose Aldo to claim the full UFC Featherweight belt, no devaluing “Interim” title needed to be attached after that. It was McGregor’s for real.

Last March we saw Conor meet his match. Nate Diaz, winner of TUF18, beat McGregor by submission in the 2nd Round. Here was a fighter who could take a serious punch. Diaz was able for the early onslaught from Conor and when he began to run out of steam in round two that was Diaz’s cue to take him down.
UFC 202 was the rematch. Again Diaz looked like he could outlast McGregor and had a stronger chin. But McGregor had a different approach this time, including some training with “Movement” specialist Ido Portal, and concentrating on kicking Diaz’s leading leg to wear the California-native down. McGregor’s gameplan helped him to victory with a majority decision at the end of the five-round slugfest (even though it was not a title fight it was still scheduled for five rounds as it was the main event of UFC 202).

That brings us right up to today. 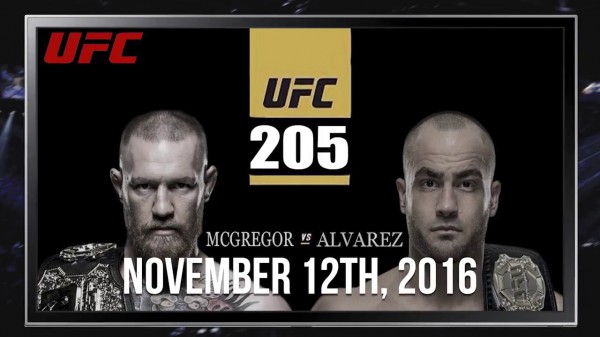 I love to watch McGregor fight, but I also love the tactics displayed in his pre-fight press conference routines. To use a cliched term, the man is “box-office”.
However, Eddie Alvarez seems to be playing the game just as well, coping with every statement from Conor, normally dismissing it with a laugh. The Notorious has boldly predicted that he will finish Alvarez in the first round.
Only on Saturday night will we find out for sure if McGregor did actually get inside Eddie’s head.

Alvarez thinks McGregor’s cardio-conditioning is his main weakness. This was evident in Diaz’s victory over The Notorious, however, he worked hard to improve that aspect of his fighting for the Diaz rematch and won after going the full five rounds.
Alvarez’s belief is one shared by many UFC fans - basically, McGregor needs to KO him within two rounds or else he’s in trouble, they think. But the five round epic with Diaz has shown that McGregor can bide his time now, he can stick to a gameplan, and his improved conditioning will help him through the Championship rounds if need be.

Alvarez is a very good wrestler but he’s also able to trade punches on his feet. He finished Rafael dos Anjos that way and he won’t be afraid to stand toe-to-toe with McGregor on Saturday night either.
This really is shaping up to be one of the greats.

Alvarez has claimed he has “never felt so unthreatened by a human being”. In the same interview, the USA fighter said that McGregor fans are “like WWE fans” and “don’t know sh*t about fighting”.
Alvarez feels that McGregor is the easiest opponent he has been paired up against in the UFC so far. “The job will get done, and it will get done violently and quickly”. Eddie’s prediction - “We’ll have to see”.