Arsenal and PSG have already qualified from Group A. Arsenal are currently just holding onto first place through a superior goal difference. The sides drew 1-1 in Paris in the first gameweek. Mesut Ozil has been in flying form for The Gunners and is joint second on the scoring charts with four goals in the group. His classy finish this week at Ludogorets will be getting many views on YouTube for years to come. Arsenal welcomes PSG to the Emirates in a few weeks and their final game is at FC Basel, who are already out.

PSG will feel they can nick the top spot in Group A if they get at least a draw at Arsenal. Their final home game is against Ludogorets, and in theory that should be a straightforward three points, putting the pressure on Arsenal to win in Basel.

As it stands, Benfica, Napoli, or Besiktas, could be progressing from Group B. This week’s 1-1 draw in Turkey for Napoli, coupled with Benfica’s slender victory over Dynamo Kiev has left it extremely tight at the top.
Napoli has to manage their way through the rest of the group without the injured Milik. Their Polish striker is not expected to recover from a serious knee injury until well into 2017. He had bagged three goals before his injury. Mertens, Hamsik and co. will have to really step up to the mark to ensure Milik’s injury doesn’t spell the end of their Champions League campaign.

Benfica travels to Besiktas next and in the final gameweek, they play host to the men from Naples. It’s all to play for in Group B and that final night in Estadio da Luz is bound to be an absolute cauldron of noise.

Besiktas are not just here to make up the numbers, however. Possessing some experienced professionals such as Gokhan Inler and Ricardo Quaresma, they have proved impossible to beat so far. If they can take the three points from Benfica in their next match then they would be well set up before their visit to Dynamo Kiev in gameweek six.

Group C is the glamour group of this season’s competition. The goals have been flying in at an average of four per game. Barcelona and Manchester City look like they will qualify in first and second respectively as it is. That is if City can get at least a draw from their next game at Borussia Monchengladbach.
Lionel Messi is this season’s top scorer with seven goals so far. Neymar has been doing his bit too, with six assists to his name.
It hasn’t gone to plan for Celtic, stuck to the bottom of the group and possibly still reeling from their opening night defeat at the Camp Nou, 7-0.

Guardiola’s City made a huge statement this week with their victory over Barca at the Etihad Stadium. That performance was probably their best so far under Pep and must have their fans dreaming the impossible dream of Champions League glory come May. 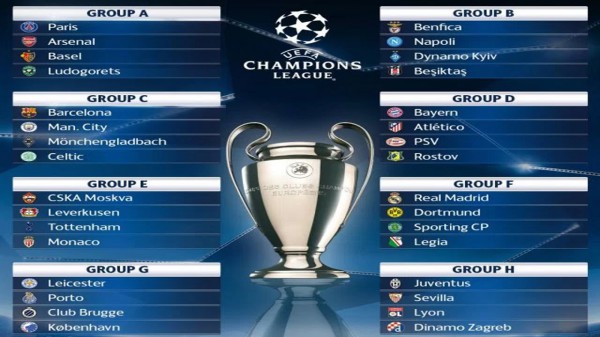 Atletico Madrid and Bayern Munich already through from Group D. All that remains to be decided is who gets first and second. Atletico has proved themselves to be masters of the European game so far again this season, and have taken maximum points from their four games so far, including the 1-0 home win over Ancelotti’s Bayern in gameweek two. As per usual, the foundation of their success so far has been built on a very reliable defence, conceding only one goal in four matches.
It’s hard to see either Bayern or Atletico drop any points before they meet on the last night of the group stages so that encounter at the Allianz Arena in Munich may well be to decide first and second place.

Lewandowski has four goals already but he’ll definitely be meeting his match again that night in Jan Oblak, Diego Godin, Filipe Luis, and the rest of the Atletico defence.

Monaco and Leverkusen are both still undefeated so far in Group E. Monaco top the group on eight points with Leverkusen in second place on six points. Spurs have lost both of their “home” games at Wembley and are struggling to find any rhythm so far in the competition. Harry Kane has also been missed but is on his way back now. It may be too late however after they lost all three points at home to Leverkusen this week.

Monaco has been impressive with Falcao, Germain, and Bernardo Silva central to what they can achieve. They made light work of CSKA Moscow last night and will be confident that they can go on to win the group. Four points from their last two games (Spurs (H) and Leverkusen (A)) should be enough to guarantee that top spot.

Leverkusen can wrap up the second spot if they win in Moscow and Spurs fail to win in France in the next gameweek. Their victory at Wembley last night was their first win in the group after three draws in a row.

Borussia Dortmund has struggled so far in the Bundesliga this season, but in Europe, they are going well and lead the group ahead of Real Madrid. The two sides played out a 2-2 draw at the Westfalenstadion and meet again in gameweek six at the Bernabeu.
This week Real had to settle for a 3-3 draw at Legia Warsaw. Indeed, it could have been worse after going 3-2 down in the 83rd minute, only for Kovacic to equalise two minutes later.
Cristiano Ronaldo is a notable absentee from the top-scorers charts so far having scored just the two goals, a mere pittance compared to his normal standards.

Sporting Lisbon, having just lost 1-0 at Dortmund, still have the faintest glimmer of hope of qualifying if they can win both their remaining games, home to Real and away to Legia Warsaw. They would also need Dortmund to avoid defeat at the Bernabeu in the final game. It’s a long shot but they can’t be ruled out yet.

Thomas Tuchel’s Dortmund has performed better in European competition than they have domestically in 2016/17. This week they suspended top scorer, Pierre-Emerick Aubameyang, for taking an unauthorised trip to Italy. He was left out of the squad for the home win over Sporting Lisbon but will be back in first-team action in the Bundesliga this weekend.

Leicester City is keen to continue on their fairytale following last season’s Premier League title surprise. They lead the group and have yet to concede a goal in their four games so far, but Kasper Schmeichel was injured in Copenhagen last night and looks to be ruled out of action for 4-6 weeks. One point from their last two games will be enough to go through.

FC Porto is in second but with a trip to third-placed FC Copenhagen coming up they will be well aware that a lot of hard work is still needed if they are to qualify.

FC Copenhagen rarely loses at home and could spring a surprise and take all three points from Porto in gameweek five. They then visit the group whipping boys, Club Brugge, in their final game. Having beaten them 4-0 at home it would be no shock for them to win in Belgium as well.
So Porto...beware.

Three Europa League titles in a row for Sevilla and now they are going strong in the Champions League. Unai Emery left for PSG in the summer but his replacement, Jorge Sampaoli, has done a great job so far in Europe. Sevilla is yet to concede a goal after four games and top the group on ten points ahead of Juventus. They managed an impressive 0-0 draw at Juventus and play them at home in gameweek five. One point from their last two games (their last game is away to Lyon) will guarantee their qualification to the last sixteen.

Juventus dropped points at home to Lyon this week, and remain in second place. They need one win from their last two games to qualify (away to Sevilla and home to Dinamo Zagreb). Higuain and Dybala have been driving Juve forward both in Serie ‘A’ and the Champions League, and with Buffon, Dani Alves, Evra, and Pjanic also in the side they could go on another run like 14/15.

Lyon gave themselves a lifeline last night with a late equaliser in Turin. It still doesn’t look good for them however with Juventus and Sevilla expected to pick up points in their remaining games, ruling out any chance of progression for the Ligue 1 club.

With just two games remaining for each team, we really are down to the business end of the group stage. At present, the joint-favourites are Barcelona and Bayern Munich, both at 10/3. There are bound to be surprises in store before May, though.

Real Madrid will undoubtedly improve in the knockout stages. Atletico Madrid is very, very, very difficult to beat. Pep Guardiola may well outdo himself in his first season at City by building on performances such as we seen on Tuesday night.

Will Wenger finally conquer the Champions League? Can Emery carry on his European success from Sevilla to PSG?
Maybe Tuchel will lead Dortmund to the final or Ranieri’s Leicester City can continue the dream. It feels more open and unpredictable this year.

My own prediction for this season is Atletico Madrid. I think they have gained so much experience in reaching two of the last three finals that they are ready to go one step further now. Simeone has instilled such a strong work ethic at the Vicente Calderon.
Mix that with the likes of Griezmann, Carrasco, and Saul Niguez adding the flair up front and they really do have a great opportunity to claim the title in Wales in May.