At 8pm Irish time on Saturday the Green Army will stand shoulder-to-shoulder against the might of the All Blacks. It will be the first meeting between the two nations since the pulsating encounter in November 2013 at the Aviva Stadium in Dublin.

A Transition Period for the Irish

That day it was a last-minute try from replacement, Ryan Crotty, that levelled the scores in injury-time. Then Aaron Cruden’s retaken conversion (Ireland were penalised for an early charge for the first kick) gave them the two-point victory, 24-22. It gave New Zealand a perfect year, 14 consecutive victories, which is a record in the professional era of rugby union. The Irish wait for a first victory over the Southern Hemisphere legends goes on, now 111 years and counting.

Ireland’s last outing was in June when they played three test matches against South Africa, losing 2-1 overall. Joe Schmidt’s men are in a transition period now following the era of superstars such as Brian O’Driscoll and Paul O’Connell. Transition periods are difficult for most teams as they adjust to their new reality. In New Zealand, however, there just seems to be a conveyor belt of talent delivering gifted rugby giants to the nation on a regular basis. Have they ever enjoyed such a period of world dominance like the present one? 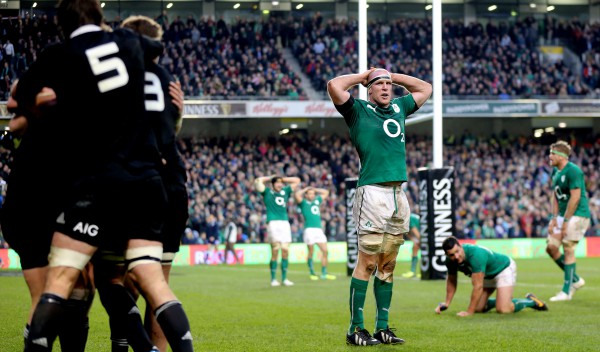 During the same period in June, the All Blacks were dominating the Welsh team, winning all three of their encounters. They have won their ten games so far this year and will be looking to cruise through their last four (two of them against Ireland) to equal that perfect year in 2013.

Ireland had a less than impressive Six Nations tournament in early 2016 and much improvement will be needed if they are to put any dent in the aspirations of the All Blacks. They are also missing Sean O’Brien who just recently returned to the Leinster set-up after his injury that he picked up in February of this year.

New Zealand has steamrollered anyone that stepped in their way this year, from South Africa to Wales to Australia. They seem to be on a different planet from the rest of the rugby world these days, even including their main rivals, Australia. The All Blacks cruised to the 2016 Investec Rugby Championship with a 100% record. This in what used to be the tri-nations, involving South Africa, Australia and now Argentina.

Ireland is not expected to get within touching distance of The All Blacks on Saturday and for good reason. This team have been a different class for a few years now. They love taking their “show” on the road too. A new crowd in Chicago to impress on Saturday night? They’ll be up for that.

Unfortunately for the Irish, expect the winning margin to be anywhere between 20 to 40 points for New Zealand.