As an end of summer treat, Bet365 are offering players the chance to win a share of £$€220,000 while playing some of their favourite casino games.

The Bet365 Summer Cash Dash is underway and it’s the perfect way to round off a summer of excellent casino promotions on the site. For every £$€11 staked on featured games at the Bet365 casino players can earn one ticket for a weekly prize draw with over 11,000 great cash prizes up for grabs. Players earn one ticket for staking on featured games and two for staking on Double Ticket Games. The promotion is running for three blistering weeks from August 25th to September 14th with a whopping £$€220,000 up for grabs across three prize draws. Players can win cash prizes of up to £$€5,500 and there’s always the chance of winning multiple prizes in a single draw if you have multiple tickets.

The featured games for this promotion include some of Bet365’s most popular slots; Age of the Gods – God of Storms, Heart of the Frontier, Ice Cave, Legacy of the Wild, Robocop and Tiki Paradise. The Double Ticket Game changes each week while the total draw fund is doubled for the final week to finish out the promotion in style. The details of the prize draw, games and promotional periods are shown in the tables below. 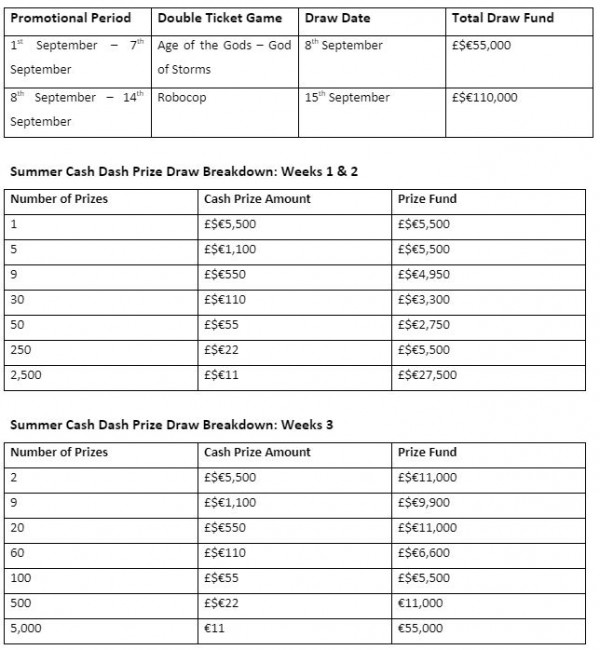