PokerStars think that they’re onto a winner with their new Power Up game.

PokerStars latest game, Power Up, has been unveiled as part of the PokerStars Championship in Barcelona. The world’s biggest poker site invited some of their members and the poker media the chance try out the game following a presentation from Severin Rasset and Chris Straghalis. Following on from their Zoom, Spin & Go and Spin & Go Max variants PokerStars sees Power Up as the next step in the evolution of poker.

Poker with A Twist

Power Up, which will be made available to players in the UK before the end of the year, combines aspects of traditional poker with strategy card games such as the popular Hearthstone: Heroes of Warcraft. Power Up is poker with a twist with extra options which aren’t available in the traditional game. Players have access to a collection of special Power Ups which can give them the edge over the competition at the table. The Power Ups range from having the option to change one of your hold cards to see what card is going to come up next out of the deck. Players are awarded these Power Ups by collecting Energy Points which are accumulated by playing hands. Players can hold a maximum of 3 Power Ups in their hand at any one time. The game takes place on a standard looking poker table but bright animations such as lightning strikes and balls of light that appear when Power Ups are played remind players that this is poker with a twist. Details of the 9 different Power Ups and their effects are shown in the table below. 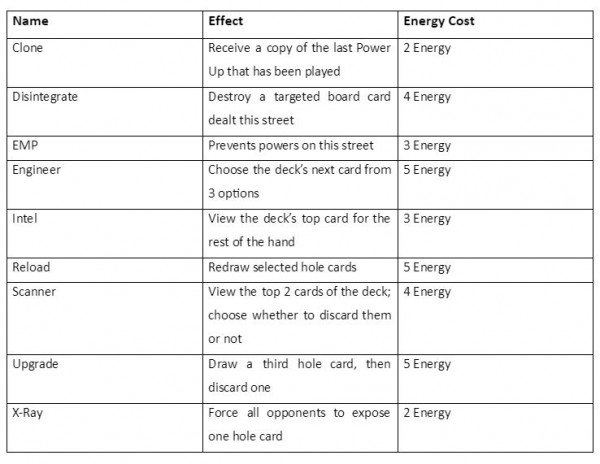 Get Ready to Power Up

PokerStars have even created a story for the game to give it a bit of a background and create a more immersive gaming experience. Power Ups is set in the year 2047, a utopian future where everything is near perfect. In this paradise, the most popular form of entertainment is a game of Power Up. Players choose avatars to play as, all with their own detailed back story.

The game is likely to polarize the poker community, with poker purists deeming it too flashy and gimmick while perhaps more open-minded players will enjoy the stunning graphics and having the option of playing something a little different. The game has been in the testing phase for a while and a second Alpha version has just been released for players to sample it. It is set to be released in the UK before the end of this year.