Head to Tokyo where the ultimate battle of tradition and discipline is about to take place in this exciting new release from Yggdrasil Gaming. As you may have guessed from the title, this game is all about the famous Japanese sport called Sumo Wrestling where the main objective is to force your opponent out of a circular ring called a Dohyo. In the game, you get to take part in a very special tournament in order to earn the prestigious title of Yokozuna. With lots of sumo wrestlers in your way along with a final round against an enormous Demon Sumo Wrestler, it’s going to be one hectic battle that’s for sure! Read on as we throw some salt into the ring and see if we can rise to the challenge of becoming the greatest sumo wrestler of all time?

Yokozuna Clash is a 5 reel slot with 243 ways to win that includes Wild Symbols, Extra Wilds, Pays Both Ways, and a Multi-Level Free Spins feature. 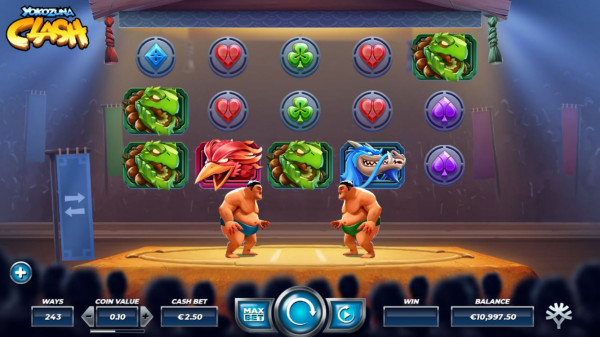 Yokozuna Clash features a range of colourful symbols that appear on the reels as you play the game. These include Tigers, Phoenixes, Lizards, Dragons, along with Hearts, Clubs, Spades, and Diamonds. The most valuable symbol to watch out for is the Phoenix. Land 5 of these on an active payline to win yourself a fine cash payout worth 12X your wager.

Like most online slots, this game comes with a Wild symbol which is illustrated by the word ‘Wild’ placed in front of a golden frame. It substitutes for all other symbols apart from the Scatter to help form winning combinations on the reels.

There are 2 random bonus events that can occur in the main game which involve the two main Sumo Wrestlers below the reels. They award the following extras:

If you manage to land a 5-in-a-row win on the reels then you will trigger the Sumo Clash feature. When this happens then 2 to 4 Extra Symbols of the highest 5-in-a-row symbols are added to the reels to help give you an even bigger win.

The main attraction of the game is the extremely entertaining Multi-Level Tournament Free Spins feature. To trigger it, you will need to land 2 Scatter symbols simultaneously on reels 1 and 5. In this lucrative bonus feature, wins occur not only from left to right but also from right to left. Either Riku or Haru is then selected to fight on your behalf to compete against the other Sumo Wrestlers in the tournament. When you form a win from the left in this feature then a power meter will move to the right by 1 bar and when you get a win from the right then the meter is pushed to the left by 2 or 3 positions. Landing an additional Scatter symbol here also gives you an extra bonus feature. If you get 2 or more winning combinations where 1 is from the left and the other is from the right then this results in the round ending as a draw with no extra features being awarded. If the power meter reaches the left then the feature will end but if you manage to move it all the way to the right and completely fill it up then you will get to fight the final boss. Defeat the Yokozuna here to not only win the tournament but also get yourself a nice a 2X multiplier on all Free Spins wins.

The Sumos in the Tournament Free Spins feature award the following bonuses:

The graphics in the game are absolutely fantastic as it takes place inside a packed out arena somewhere in Tokyo with sumo wrestlers appearing just below the reels poised and ready to push each other out of the Dohyo. Symbols in the game are a delightful mix of animal symbols including Tigers, Phoenixes, Lizards, Dragons, along with typical Heart/Diamond/Club/Spade icons. The animations are exceptional as symbols enlarge and pop when part of a winning combination on the reels. For example, when the Lizard symbol is part of a win then it will proceed to open its mouth as a mysterious white light shines brightly from its eyes. In particular, the Tournament Free Spins feature deserves special praise as you get to duke it out with a variety of Sumo Wrestlers including Scottish Wrestlers and Demons in order to earn the title of Yokozuna.

The music is suspenseful and tense with lots of loud drum effects expertly used. It complements the fast-paced gameplay perfectly.


Our Verdict on Yokozuna Clash

This very entertaining slot comes from leading software studio Yggdrasil Gaming and although there are not that many Sumo Wrestling themed slots out there right now, it is definitely the pick of the bunch! Featuring outstanding graphics and animations, along with an array of exciting bonus features, it’s a thrilling experience from start to finish. The standout attraction of the game by far is the Tournament Free Spins feature as you get to battle other Sumo Wrestlers to claim Enhanced Multipliers as well as additional Wilds. It is also in this highly rewarding feature where you can win the top prize which is an excellent 3,440X your wager! In terms of variance, it is Medium so thankfully you won’t be waiting too long to land a decent cash prize here. For even more Sumo Wrestling action on the reels, check out Super Sumo along with Yggdrasil Gaming’s own Hanzo's Dojo.

Wrestle your way to a sumo-filled fortune on the reels when you play Yokozuna Clash!