Yak, Yeti and Roll from Betsoft Gaming: Slot Review - your next win is just a snowdrift away!

Jump in a snowmobile and join Yak and Yeti as they head out on a wintery trail in this fun and entertaining game.
betsoft gaming casino game review slots yak yeti and roll

The cold weather is here to stay and you know what that means...Winter is almost upon us! To celebrate the arrival of this new season, top software provider Betsoft Gaming have released this new online slot to warm you up nicely on those cold winter nights. This game revolves around a plucky Inuit called Yak who has formed an unlikely friendship with a giant but cute Yeti! Together, they traverse a snowy landscape in a custom-built snowmobile that is driven by both of them at the same time! Let’s join them on their latest trip to the snowy mountains to see if we can uncover lots of snow-covered cash prizes in this game?

Yak. Yeti and Roll is a 5 reel slot with 20 paylines that includes Free Spins, Cascade Multipliers, a Double Up bonus game and a Buy feature. 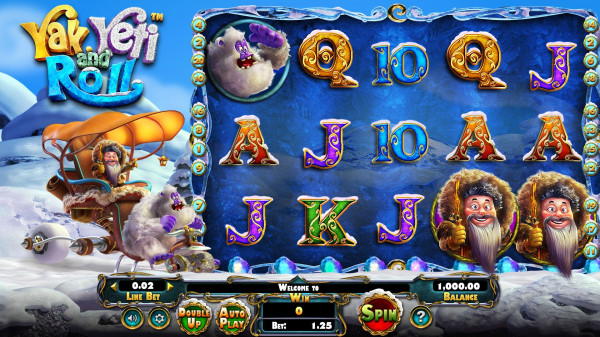 The first feature to highlight is the Wild symbol which is represented by an image of the giant Yeti. This symbol only appears on reels 2, 3, and 4 in the game and its main job is to substitute for all other symbols apart from the Scatter.

As you form wins on the reels, you will receive multiplier prizes as Yak and Yeti advance along a snowmobile trail one position at a time. The trail is displayed right below the bottom of the reels. Once triggered, winning symbols will disappear to be replaced by new ones which can lead to even more cascades and lots more prizes. This is known as the Cascade Multiplier feature. In addition to Multiplier prizes, you can also trigger 8 or more Free Spins by getting at least 7 cascades in a row as well as win cash prizes as high as 200X your stake!

The Scatter symbol is illustrated by an image of the Inuit and this symbol not only pays both ways but it is the highest paying symbol in the game. Land 5 of these symbols on an active payline and you will be dancing in the snow with a nice payout worth 12.5X your bet! This symbol is also used to trigger the Free Spins Bonus Game. The more Scatters you land then the more Free Spins you will receive. For example, 3, 4, or 5 Scatters awards 9, 12, or 18 Free Spins. The Cascade Multiplier feature is also active in Free Spins with Free Spin Multipliers multiplying Cascade Multipliers as well persisting for the entire duration of the feature to further boost your chances of landing a big win on the reels. You will also be happy to know that it’s possible to retrigger this feature.

If you do not feel like waiting around for the Free Spins feature to trigger then you can pay to activate it by clicking on the green ‘Buy Feature’ button at the bottom of the reels to activate it. Triggering Free Spins this way will give you a fine set of 18 Free Spins plus 4X multipliers to go along with it!

The final feature is the Double Up game and this is an optional bonus round which triggers whenever you create a win on the reels. In this exciting but risky feature, you can gamble half or all of your winnings by choosing the heads or tails of a rotating gold coin. It’s possible to gamble as many times as you wish but be careful as if you pick incorrectly at any time then you will lose all your current winnings and be taken back to the main game with nothing to show for it.

Yak, Yet and Roll features beautifully designed cartoon-like graphics as the unlikely team of Yak and Yeti trundle along a snowy landscape in their custom-built snowmobile. The reels are displayed on a transparent icy sheet with intricate carvings surrounding it. It is visually stunning to look at. Symbols are superbly designed and consist of Yak, Yeti, a Husky, a Snowmobile, an Igloo, a Deer, Gloves, as well as your typical A – 10 icons. The animations are top-notch as Yak and Yeti move their snowmobile along the trail and symbols magically disappear each time you land a win on the reels. I also like how the sky changes to a pinkish cloudy colour whenever you trigger the Free Spins bonus game.

The music is charming, melodic and full of sleigh bell sound effects. It fits in really well with the cute theme of the game.


Our Verdict on Yak, Yeti and Roll

This game comes from top software producer Betsoft Gaming and is the perfect game to play to warm you up on those cold winter nights. Yak, Yeti and Roll features amazing visuals, a wonderful soundtrack, and a fine set of bonus features to keep you playing in the snow for as long as possible! The Cascade Multipliers can be very lucrative especially when you rack up a few cascade wins together on the reels. The main attraction of this slot is without a doubt the highly rewarding Free Spins feature as Free Spin Multipliers multiply your Cascade wins as well as persisting for the entire feature! It’s also nice that you can ‘Buy’ the Free Spins feature if you don’t have the patience to trigger it yourself. In terms of variance, I found this slot to be Medium so thankfully it won’t take you too long to win a few cash prizes on the reels. For slots with a similar Winter theme, check out Cold Cash and Wolf Cub.

Land a snowball-sized fortune on the reels when you play Yak, Yeti and Roll!