Wild Antics from Blueprint Gaming: Slot Review - avoid that aardvark at all costs!

Join an adorable crew of ants as they look to build their colony as well as avoid a hungry aardvark!
blueprint gaming casino game review slots wild antics

This slot is all about insects and animals and it is clearly influenced by the lovable A Bug’s Life movie that was released by Disney all the way back in 1998. The game focuses on a colony of ants living in a back garden and it features a range of cute ant characters. So if you are a fan of some adorable creepy crawlies then this slot was tailor-made with you in mind.

The game has 5 reels, 20 paylines, and features Free Spins, Matching Bonus and a Jetpack antics feature. 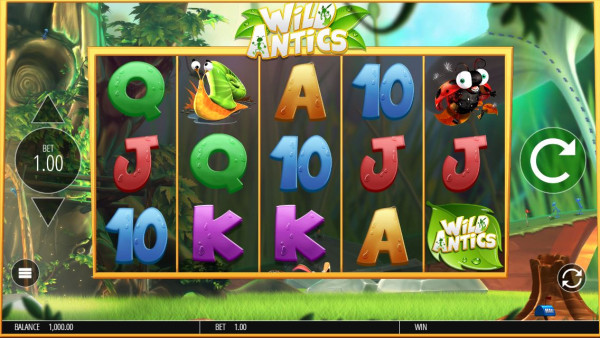 The first thing feature worth mentioning is the Wild symbol which is denoted by an ant sitting on a flower petal. This symbol substitutes for all other symbols except the various Bonus symbols. It is the highest paying symbol in the game and if you manage to land 5 of these symbols on the reels then you will be treated to a wonderful payout of 500X times your total bet. It is also worth noting that the Wild Antics logo symbol comes super stacked when it appears on the reels.

The Jet Pack Antics feature is triggered randomly during any spin and can award one of four of the following features: Aardvark Antics – turns random reels Wild and adds up to 40 additional paylines, Frantic Antics – symbols are transformed into winning combinations, Colossal Antics – colossal Wilds are added to the reels and Wild Antics – random reel positions are turned into Wilds. This is a neat feature and keeps the excitement levels up the more you spin the reels.

If you land the Aardvark bonus symbol on reels 1 and 3 along with a Worker, Soldier, Colonel, Queen bonus symbol on reel 5 then you will trigger the Matching Bonus feature. This nice feature consists of 4 different bonus games and is dependent on which ant character symbol you land on to activate this feature. The Worker Ant Roaming Wilds awards free spins along with any Wilds collected roaming on the reels for the duration of this game. The Soldier Ant Multiplying Roaming Wilds game gives Free Spins and any Soldier Ant symbol that remains in play will roam around the reel for each spin and if these symbols roam to the same position then you will be given a nice multiplier ranging from 2X to 5X. The Queen Ant Colossal Roaming Wilds game gives Free Spins and the Queen Ant symbol becomes a massive 3x3 Wild symbol if she appears during this game. Lastly, the Colonel Ant Expanding Roaming Wilds feature will award you Free Spins and any Colonel Ant symbol that lands in the same position during this game will expand to cover the entire reel.

The graphics are superb and the ants are brought to life with amazing detail and give off a cute cartoon-like quality. The background is covered with a tree, an anthill and some foliage and if you look closely, you can even see some ants marching in a straight line over a branch. Symbols run smoothly along the reels although there are no animations worth highlighting when you form a winning combination.

The music is fun and bouncy and suits the game right down to the ground where I’m sure some ants are collecting food there!


Our Verdict on Wild Antics

Wild Antics is produced by Blueprint Gaming and it is a fun adventure into a very busy ant colony. The game is visually stunning and there is a lot of cool features that provide countless hours of entertainment. I particularly enjoyed the Jet Pack feature as it keeps you on your toes as you spin those reels and I also liked how the bonus games can be retriggered. The game is of Medium variance and if you land the right symbols in the Free Spins features then you will be in line for a nice payout.