Become a made man and join the Slotfather's shady family of criminals as they go on a crime spree throughout the city.
betsoft gaming casino game review slots the slotfather the slotfather part ii

The Slotfather was a hugely successful slot released by Betsoft Gaming a few years ago so it was a no brainer that the company decided to release a sequel to this much-loved game. The slot is aptly called “The Slotfather Part II” and much like the classic gangster Godfather franchise that it parodies, it focuses on the shady underworld that criminals operate in. With characters called Fat Tony, Franky Knuckles, and Snakes Eyes Sammy, you won’t be inviting them around for a cup of tea anytime soon! Let’s see if this game can evade the bad sequel curse and mirror the success of the original game.

The Slotfather Part II is a 5 reel slot with 243 ways to win and it contains features such as Gangster Bonus, Free Spins, and a Gamble mode. 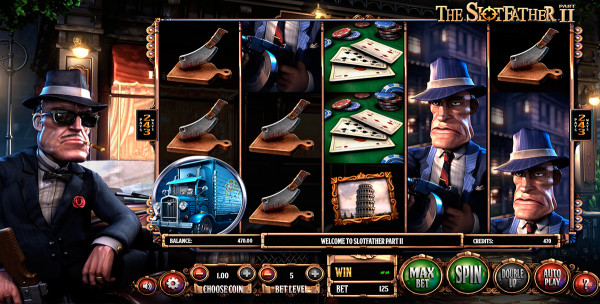 The first feature to highlight is that this game contains a whopping 243 ways to win! What this essentially means is that winning combinations can be formed as long as there are matching symbols in adjacent rows starting from the first reel on the left-hand side. The highest paying symbol in the game is the Slotfather and if you land 5 of these symbols then you’ll be treated to a nice payout of 300 coins. The Wild symbol is illustrated by a chest that is filled with coins. It substitutes for all other symbols except the Scatter symbol to help form winning combinations. It is worth noting that it only appears on reels 2 and 4 in the main game.

The main attraction of the game is the Gangster Bonus feature. This is activated by landing 3 full reels of matching gangsters. Do not worry if you only land 2 full reels of matching gangsters as you’ll be given a free Respin to help you land the third gangster on the reels. The gangsters consist of Frankie, Fat Tony, and Snakes Eyes Sammy. In this exciting bonus game, you collect protection money by picking from some envelopes using the gangsters. Once you find the envelope that reveals the word “Collect” then the feature will end. Each gangster awards a different set of prizes and they are as follows:

The last feature is the optional Gamble game. This is activated whenever you land a win on the reels and gives you the opportunity to increase your winnings. To take part in this game, all you have to do is click on the “Double Up” button when it lights up after you have formed a win along the reels. The aim of this game is to choose between heads or tails as a golden coin is flipped. Guess correctly and your winnings will be nicely doubled. If you are a bit of risk taker, it is possible to gamble 100% of your winnings but be warned guess the side of the coin incorrectly and you will lose all of your winnings. You can also collect your current winnings at any time by pressing the “Collect Bank” button while in this feature.

As you would expect from a Betsoft title, the graphics are stunning and beautifully rendered on screen. The game is set outside a classy Italian restaurant with the eponymous Slotfather casually leaning against the reels on the left-hand side. Symbols are comprised of the Slotfather himself, some cards, a money clip, a cigar and brandy, as well as a picture frame of the leaning tower of Pisa! The symbols run along the reels nice and smoothly and each time you land a win, the Slotfather will celebrate with you by jumping up and down and tipping his hat towards you.

The music has a nice Italian flavour and features lots of slow piano and violin sounds. It suits the gangster theme of the game superbly.


Our Verdict on The Slotfather Part II

This game is produced by Betsoft Gaming and is a highly entertaining slot to play. In rare cases, a sequel can sometimes be better than the original movie and much like the The Godfather Part II, this game surpasses its predecessor in every single department. The presentation of the game is sharp and stylish, the RTP is nicely set, and the Gangster Bonus feature will provide you with countless hours of entertainment. I found this game to be of Medium variance so you won’t be waiting too long until you land a gangster sized win on those reels!

Join a criminal empire in The Slotfather Part II!