Taco Brothers Saving Christmas is designed for Mobile First and offers an exciting game filled with Wilds, running Wilds, multipliers, respins and free spins. There are as many as 243 ways to win, with the chance of winning up to 150,000 coins in this exciting 5 reel slot.
casino game review christmas elk studios slots taco brothers taco brothers saving christmas

This slot is played on 5 reels, with 243 ways to win. As you have probably guessed from the name, it is a Mexican-themed video slot released for this festive period.

This is the second outing for the Taco Brothers (Pepe, Pico and Paco) and it is full of festive cheer including wild re-spins and a free spins round with sliding wilds. You can bet from between 0.10 to 50.00 per spin.

The villain in the Taco Brothers’ lives is Captain Diaz. Pepe, Pico and Paco have to protect their town from Captain Diaz.

Happy villagers have decorated the town with lights, and they are draped in bow-ties and peppermint crackers, while wrapping gifts for the upcoming festivities – it is Christmas time! The kids are excited... but also anxious of Captain Diaz taking their precious tac 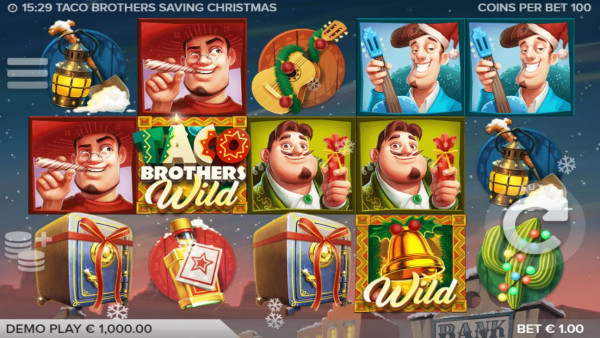 If you get two Taco Brothers on the even numbered reels on the same spin you will trigger the Taco Brothers Respin feature. Basically, it gives you a second crack at landing 3 safes (more below).

Free spins are on offer in Taco Brothers Saving Christmas too via the Wild Escape Bonus feature – to trigger the feature, you’ll need to land the safe scatter symbol on reels 1, 3 and 5 on the same spin. There are a couple of wrinkles to help you on your way during the feature. Firstly, multipliers are on offer which can treble your payouts.

Look out too for the Running Wild feature – Pepe, Pico and Paco all land on reel 5 one at a time and move 1 position to the left with each free spin. Watch out for the dastardly Captain Diaz though. He can stop the brothers in their tracks and freeze them behind bars!!

Helping the brothers is the Señorita who can release the brothers from the clutches of Diaz and resume their wild abilities – she can also add extra free spins to your total. The free spins continue until all the brothers are behind bars or the trio have made their escape.

It’s a great feature that really does bring some added excitement to the game!!

If you have played the first Taco Brothers game then you will be expecting a high standard of game design here. You will not be disappointed. This slot meets those high standards of the first game with an added festive twist or two thrown in for the season that’s in it!

The dusty town backdrop from the first slot is replaced by a somewhat unlikely snowstorm this time around. You will also see cactus plants decorated with fairy lights, guitars wrapped in tinsel and Santa hats replace the regular sombreros too!

There are no “big win” stories yet as this game has just been released. Will you be one of the first?!!!

So…. is this game different to the first slot? Is there anything new? The answer is YES :)

This second Taco Brothers instalment is a far more volatile game than the original with the variance in the high bracket. Expect less action in the base game but be prepared for some explosive thrills in the feature instead.

Taco Brothers Saving Christmas is an excellent sequel, especially given the added volatility. It may not be the traditional way to celebrate Christmas for many of us but here at Gaming Revolution we’ll definitely be heading down Mexico-way this Christmas!!