Taco Brothers by ELK Studios is a great online slot game with a fabulous free spins feature, which promises not only to be fun but also profitable. This Gaming Revolution review explains all slot features, including its ups and downs.
casino game review elk studios slots taco brothers taco brothers saving christmas

The idea behind the slot is that the attractive señorita has released her brothers from jail so that these unlikely heroes can save the town from being starved off tacos. If that has made you hungry, keep on reading. 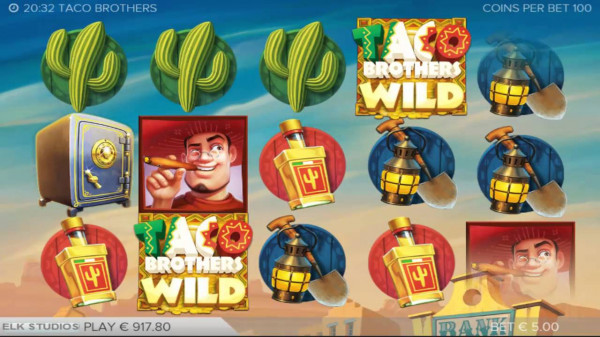 The basics first: This slot game has 243 ways to win, which isn’t excessively high, but higher than in most slot games. Furthermore, it comes with the golden bell, which acts as wild and can substitute all symbols, except for the bonus and re-spin symbols. I am sure with the mention of these symbols, I got your attention.

The Re-spins feature in Taco Brothers can appear on reels two and four. If a player hits the symbol, he will be awarded another chance. This feature can help players receive enough symbols that depict a safe to trigger what’s known as Wild Escape in Taco Brothers. In essence, it’s a free spins feature, which also awards players a multiplier. Oh, and that is done in dramatic style. A bomb explodes before the start of the game and reveals whether your winnings will be multiplied by one, two or three.

The player is then redirected to a new screen, which shows the three brothers, Captain Diaz and the señorita. The brothers act as wilds. Captain Diaz meanwhile has the ability to lock the brothers up, and the señorita, in turn, can release her wild brothers. The game ends on a high if all players have escaped, or the game ends on a low, if they have all be locked up in jail. Either way, though, the bonus game is an exciting little extra, which may also turn out to be highly profitable.

Mexico is often portrayed in clichés. Taco Brothers by ELK Studios certainly falls into this category. Paso, Pico and Pepe (what else could their names be!) try to stop nasty Captain Diaz from stealing all the tacos. Arriba! A friendly and bright screen greet players to a dusty Mexican town, where tequila and cactuses – in form of symbols – are rife.

This slot game is fabulous in terms of graphic design. The symbols are detailed and the colours sharp. So far, so good!

The big wins and great fun come with the free spins round. The bonus game excites with quirky design and a good system, which ups the RTP to 96.30%. ELK Studios has managed to create a video slot game which caters for high-rollers and novices alike. Furthermore, this game includes ELK’s automatic betting strategy option, which helps players invest their stake ideally. If you do not wish to make use of this, it is recommendable to place bets you are comfortable with. To get more concrete, only ever wager what you can also afford to lose.

Our Verdict on Taco Brothers

The game may be set in Mexico of 1881, this slot game, however, is a far cry from that world. Its graphics are contemporary and some seriously good software development went into creating this online slot game. Now, Taco Brothers may be an exaggeration of life in Mexico, and may not go down to well with Mexicans, it’s nevertheless a great game with a fun theme.