Spellcraft from Playson: Slot Review - weave your own magic on this impressive slot

We tested Playson's latest slot machine. Its theme sure is magical. How about its graphics and potential payouts? This review provides you with plenty of useful information on Spellcraft.
casino game review Halloween playson slots spellcraft 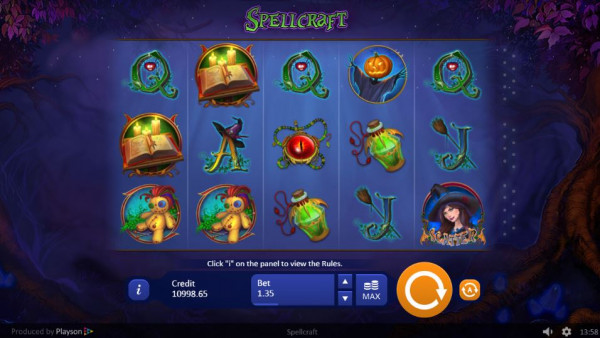 Spell Craft is modern and unique

Spell Craft by Playson makes a fresh and unique impression: the graphics are sleek and modern and the reels spins seamlessly, without the slightest lag. This slot machine is one of the latest additions by a relatively new games studio. Playson is a Maltese-based venture that has managed to build its reputation within the industry in a short space of time.
The theme of this slot, as the name indicates, revolves around witches. The three witches that are the main characters in the game bewitch players with graphics that rival Pixar and other animation companies.

There’s more behind Spell Craft’s pretty interface. The slot game comes with 27 lines on 5 reels and 3 rows. That’s not all: the game comes with a so-called Ghost Feature. This feature is triggered upon receiving a scatter symbol and adds a sixth reel to the game. That’s not all though, you are then given 15 spins on the six reel game, which boosts a player’s potential to win immensely.

Did I mention that there’s also a bonus game? Well, there is. This means that the slot machine can result in high wins. Therefore, the game lends itself to higher stakes. However, as with any game of chance, I wouldn’t recommend blowing it all in one go. If the name is anything to go by though, the chances of you winning should be quite decent.

A great change from conventional slots

Spell Craft is different. This is unsurprising. As casino aficionados, we are so used to games by the main software providers: NetEntertainment and Microgaming. Of course, a new game by Playson is a welcome change. It’s executed well!